Hi, I want to get started on Apollo 12 and beyond, and I want to begin by creating checklists for the MFD for easy reference.

Are Apollos 12, 13, and 14 running the correct software or have they been replaced by ones from the earlier/later missions? (I believe 15-17 are running accurate software already) Since the instructions for various procedures could differ between missions (like PTC, PDI, or LM P52), I thought it would be best if I seek clarification first. Especially since some of them involve changing data in memory.

In the event that all of the missions are running accurate software, would Apollo 12’s AGC be closer to Apollo 11’s or Apollo 13’s AGC? I cannot find a G&N dictionary for reference on 12.
Last edited: Feb 26, 2021

Apollo 12 runs Luminary 116 for the LGC, which is the correct software. For the CMC it runs Comanche 55, the Apollo 11 CMC software. There is an ongoing reconstruction project to recreate Comanche 67 for Apollo 12, but there are some major obstacles and it will not be done any time soon, if at all without some major breakthroughs. So I wouldn't bet on that becoming available.

Comanche 67 already had Verb 79, an extended verb for initiating PTC and orb rate maneuvers. This feature was later incorporated into P20 for Apollo 15+. So that would be one major difference between Comanche 55 and 67. There is a LM G&N Dictionary to be found here: https://history.nasa.gov/afj/ap12fj/a12-documents.html But not the equivalent for the CSM, the Operations Checklist as it was still called on that mission.

Apollo 13 runs Comanche 55 as well and an early version of Luminary 131, so neither is the correct version. The major difference in Luminary 131 being that it still had P65 and P67, while in the flown version those got deleted and some automatic and manual capabilities implemented in P66.

Apollo 14 runs a modified version of Artemis 72, the Apollo 15-17 CMC software. The modifications are only so that it can be used in the timeframe of Apollo 14, so it's functionally identical to Artemis 72. For the LGC Apollo 14 runs a reconstructed Luminary 178, which, while not derived from a listing, is verified as being identical to the flown version.

And as Apollo 12 has no MCC support yet, feel free to ask any RTCC MFD questions, I'm sure some will come up haha.

Ron Burkey has a handy map of the currently avaliable AGC software versions: 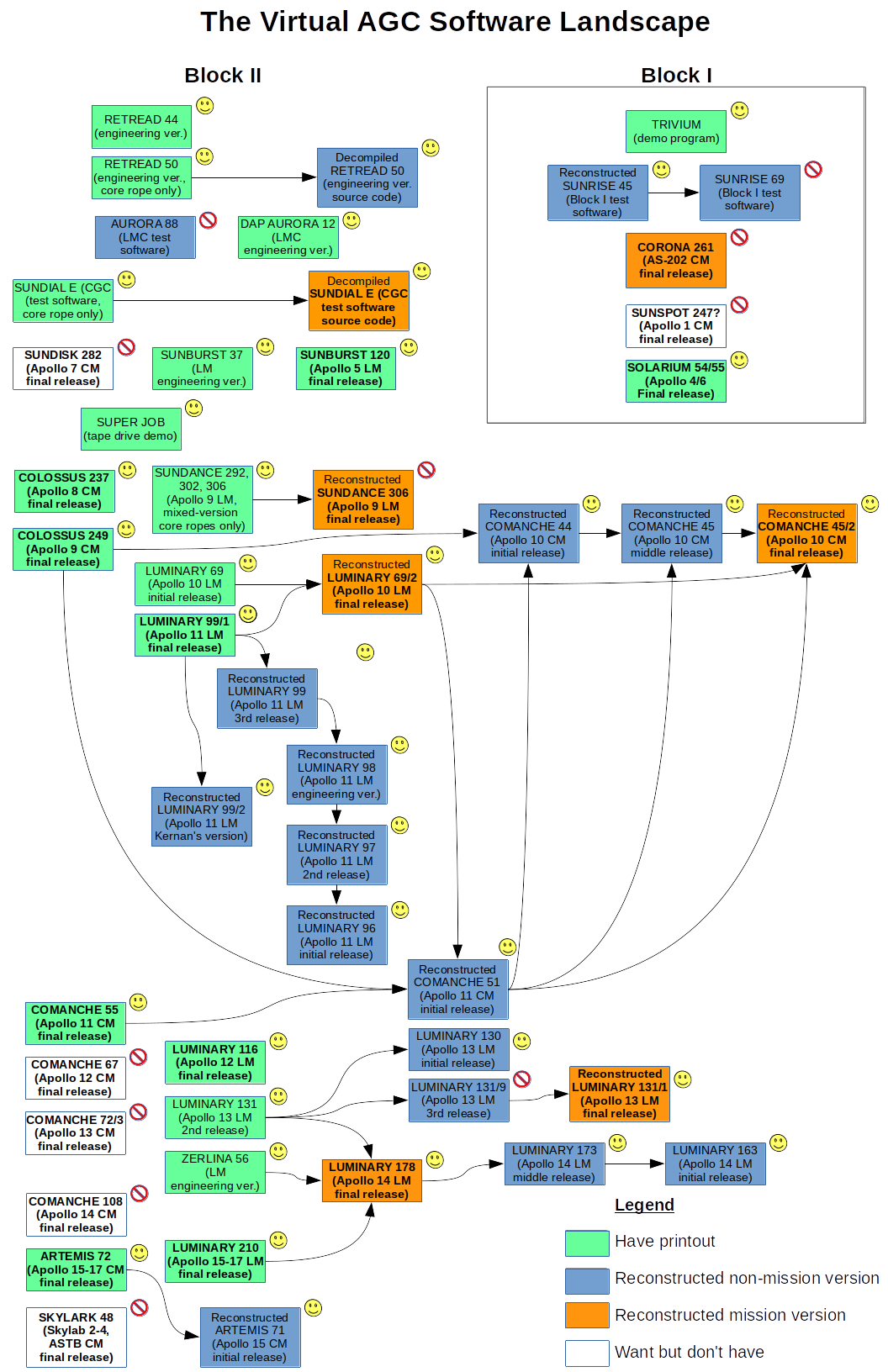 Thanks for the info indy, knowing that I'll need to use the Apollo 11 G&N checklist for 12 and 13 is a good place to start. Although, I probably won't be touching 13 for now as Apollo 14 took over its mission to Fra Mauro.

As for the lack of a G&N checklist for the Apollo 12 CSM, I think it'll not be a problem since it's going to be running Commanche 55.

Next question: On the old RTCC MFD, I was able to target a specific pericynthion using lat/lon, altitude, and time, with data you could get from the mission reports (which meant that I never needed to use anything but option 1 TLMCC). How would I go about targeting these parameters on the new MFD? Or is it no longer an option.

It is still an option. All the TLMCC options now use a data table, called the skeleton flight plan table, for initial guesses and certain targeting parameters. This also contains the nodal target, the lat, lon, alt and time for option 1. These use a different coordinate system now though, Earth-Moon Plane vs. selenographic, so they need to be converted. For that I added a page under Utilities, Nodal Target Conversion which even has a button to export to that data table...

Except that the data table isn't complete with only those numbers, so that alone doesn't work. I'll try to put in a quick fix for that.

Also, the manual for the RTCC MFD is quite up to date when it comes to the TLMCC processor, so I can recommend reading that section. Although I seem to have forgotten to add certain tables referred to in the descriptions.

What I would recommend doing though, is to use the re-optimization options for MCC-2. That would be option 5 in this case (option 4 in reality, but I implemented the Apollo 14 version of the TLMCC processor where option 2 was incorporated into 3, and 4 into 5, and options 2 and 4 were replaced with something for performing DOI in place of LOI-2). The only input you need to make for that calculation is the TIG.

Looking at the transcript the Apollo 12 LOI-1 ignition time was exactly as in the flight plan though. Thanks to non-free return that can be accomplished with constraining the time when you arrive at the Moon, that is F23 on the constraints page. You can fine tune the LOI TIG with that until it shows the desired number, just takes a bit of trial and error, just as the FIDO would have done that. This general process is also explained in an example for Apollo 11 MCC-2 in the RTCC MFD manual, which is probably helpful. Currently you need to input those constraints using the same input format as in the real RTCC (e.g. "F23,83:25:00,83:35:00;") but I am in the process of changing my mind about that being of any use.
T

Out of interest, I understand from Apollo 12 onwards, MCC-H read up a Noun 69 correction shortly after PDI was initiated, to update the down/up range component of the AGC’s targeted landing site. While I’m sure the AGC software supports it, is such an update able to be simulated from the MCC side? Is there even any need for that in NASSP, if there was a simulated Surveyor probe to visit?

I have an Apollo 15 document with a bunch of details about how they came up with the Noun 69 values. It seems to be a mixture of automated processes in the RTCC and some tables where they even compensated for Earth-Moon ephemeris errors (so the ability of the LGC to convert it state vector to a Moon fixed state at the landing site). There is a backup method they used with some terminology that is a bit more familiar to me. That would use the Vector Compare Display that the RTCC MFD already has. You would downlink the LGC state vector to the RTCC MFD and also generate the actual state vector from "ground tracking" and then compare them. I can come up with a procedure for this if you want. Most complicated part is getting the sign right...

However, I wouldn't expect there to be much of a need for N69 right now. The lunar gravity model in the AGC is essentially the same that Orbiter has. A quick test I just did with that display in the RTCC MFD gave errors of below 100 feet. Although that was with Apollo 15 and probably an uplinked state vector that was very fresh, for missions that just did a DOI before landing the error will be a bit larger, even in NASSP. And the AGC orbital integration will get some numerical errors over time.

I have used N69 successfully when we used to have some bugs in the landing radar code. It gave a predictable error I could correct with N69. I figured out that value by trial and error though.
T

While I probably won’t be flying Apollo 12 any time soon, I would be interested in the procedure you have devised to test out someday.
L

So, Apollo 8, 11 & 15 run on the original software (Luminary, Colossus, Artemis, Comanche) that was flown on the real missions for the CM and LM, the rest is a bit of improv?

Apollo 15, 16 and 17 all flew the same software (Artemis 72 for the CMC and Luminary 210 for the LGC), so it is Apollo 8, 11 and 15-17 for which we have the correct software from original flight program listings. That is still true when taking the Abort Guidance System into account. We run an emulator for that as well, but only have two versions, Flight Program 6 and 8. FP6 flew on Apollo 11-12, FP8 on Apollo 15-17.

While we don't have them from program listings, we can say with great confidence that we also use the correct software for Apollo 10. Luminary 69 Revision 2 was reconstructed from Luminary 69 Revision 0 (a fairly small and contained update that the software got before flight) and Comanche 45 was reconstructed from (mostly) Comanche 55, flown on Apollo 11. We have a document with banksums (like checksums) for almost all AGC software revisions that were actually manufactured into ropes. The reconstructed versions we use have completely correct banksums. This is not a perfect system and you could in theory change the software in such a way that the banksum stays the same. So I guess we can only say with 99.99% confidence that we have the correct Apollo 10 software, while for Apollo 8, 11 and 15-17 we can say it with 100% confidence.
T

I was looking around for vAGC topics and I found this very interesting post (even for a not programmer, but for historic interest and follow up NASSP user), what is still not clear to me is which SW is currently used/implemented in others NASSP missions/vessels, namely:

In NASSP A5 mission which SW is used? I think it is flyable, I remember to have seen an old post of Indy91 about this mission...

Concerning the LM AGS software:
Thanks for your kind reply.

There used to be a post by me where I had listed all the versions and what NASSP uses in a table, but the big forum update a few years ago seems to have broken it. I updated the table, but tables seem to be broken in this forum? Maybe it re-appears here if/when that is fixed https://www.orbiter-forum.com/threads/nassp-and-a-real-agc.37240/post-558450

Anyway, Apollo 5 uses Sunburst 120, the originally flown software. If you want to try Apollo 5 there is a T-60s scenario under Project Apollo - NASSP\Apollo - Mission Scenarios\Apollo 5. I haven't really compiled an activation checklist for that mission, the other scenario (under WIP scenarios) is a cold and dark LM at T-1 hour and it's not so simple to set it up for launch. So I would suggest using the T-60s scenario. It's a fully automated mission, so it's just an interesting show what the LGC and the LM in general can do.

Apollo 13 CMC: We use Comanche 55, actual mission was Comanche 72.
Apollo 13 LGC: We use Luminary 131, actual mission was Luminary 131 Rev 1. Main difference is the addition of Auto P66 and removal of P65 and P67. A reconstruction project is underway.
Apollo 14 CMC: We use a modified version of Artemis 72 (actually used for Apollo 15-17) with changed numbers for the different launch year.