People who live alongside the Maas (Meuse) river are asked to evacuate or move to an upper floor. It's expected that the river will rise another 1.5 meters.

Crazy situation. 42 fatalities in Germany reported so far and six in Belgium. Hopefully all necessary precations are in place now to prevend further loss of life.

We have already exceeded 40 deaths in the two hardest hit states in Germany and more are likely to come.

The Steinbach dam is badly damaged and in danger of collapsing completely.
And another dam in the Ruhr region is about to spill over and make flooding worse.

Its really a dire situation right now and the last thing we need today is more rain...

In the Swisttal county near Bonn multiple people are completely enclosed by water now - this place is also in the possible flood path should the Steinbach dam fail, the Steinbach flows into the Swist river.

Now 49 people in Germany and eight in Belgium are reported to have lost their lifes. And people are reported missing, so the number is likely to rise.

These are absurd high numbers of fatalities in areas where normally not so much ever happens. It's stunning. In Southern Limburg in NL, 10.000 people are being evacuated.

These are absurd high numbers of fatalities in areas where normally not so much ever happens. It's stunning. In Southern Limburg in NL, 10.000 people are being evacuated.
Click to expand...

Those are certainly the worst floodings in last 30 years, probably the last 100 years in some places. Also some residential lots have probably been built on floodable areas, with too little precautions (having at least 1 floor in the house, but also having the local population fully aware of the risks and ready - always have some spare drinking water and snacks that don't require heating, portable radio and lights, that kind of basic survival stuff). Death toll is now 51 in Germany.

Some floodings locally in the North-East of France too, but nothing that catastrophic. Emergency services are on full alert there.

I hope all our Belgian, German and Swiss orbinauts and their relatives are safe. Avoid traveling by car unless really necessary and follow local authorities advice, most of lost lives were people trapped in their cars

30 french firemen from Lille and their gear (trucks, pumps, generators, inflatable boats) have been dispatched in the neighbouring Belgium to help. 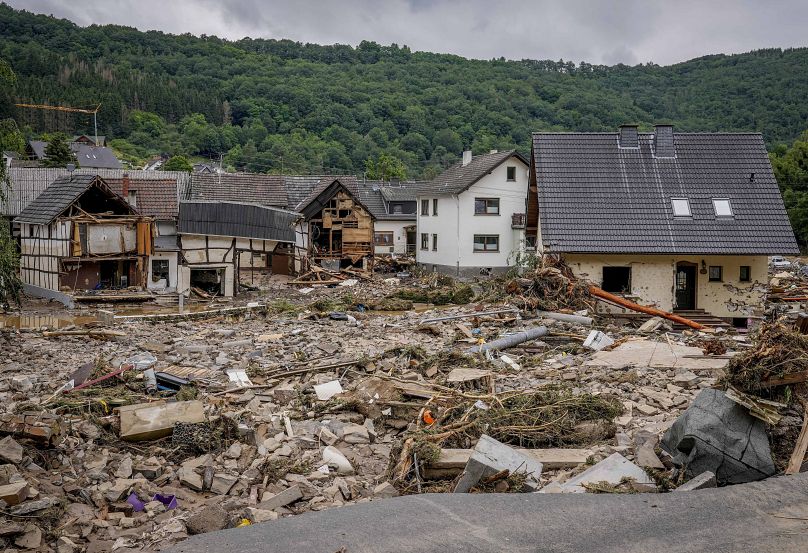 Yeah, Schuld is an especially badly hit place, but as I mentioned in the chat - it also has a big disadvantage in its geography.

Here is a picture of the damage to the Steinbach dam. As you can see: Not good, not terrible. 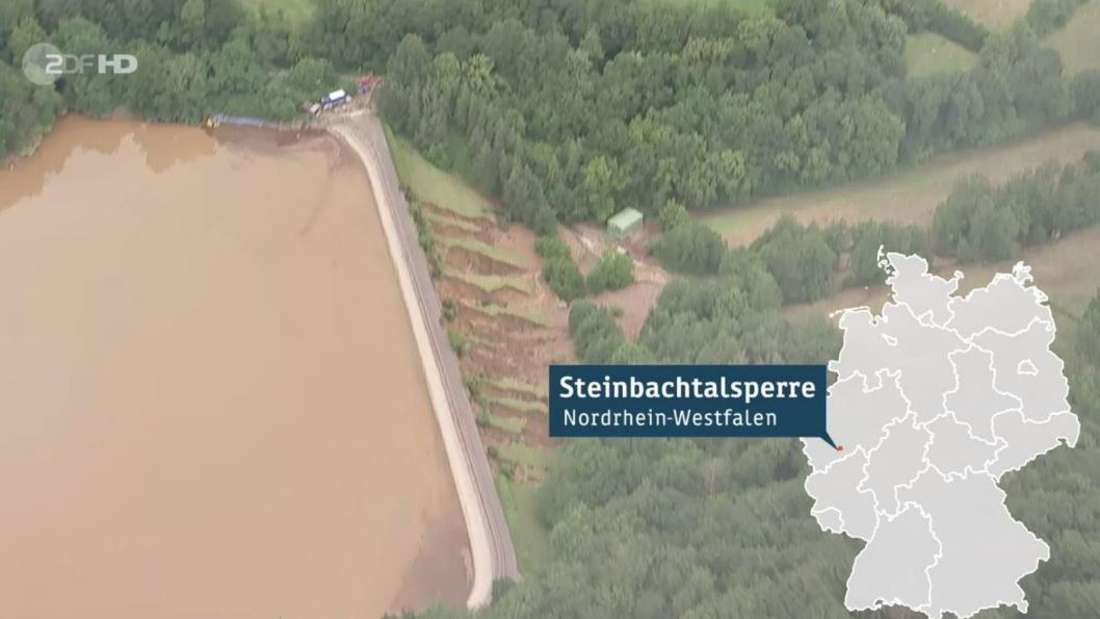 For comparison: This was how it is supposed to look like since 1991:

Now, we have more deaths and missing in Erftstadt, further down the Erft river, after the flooding caused a series of landslides in the quarter of Blessem.


https://twitter.com/i/web/status/1415925994800701441
The cause seems to be a local gravel pit, which got flooded through a sand layer underground and where the rapid subterranean flow eroded the soil above.

Looks like we get the full menu delivered for such a flashflood event. Its now 58 deaths and 1300 missing.

We also got informed from friends that there is now a emergency warning in place in regions of southern Sweden, they also expect massive rainfall and flooding in the next hours.
Last edited: Jul 16, 2021

Also, who thinks that this kind of event is normal and climate change doesn't happen... here is a nice little interesting series of maps:

Correction: Now its at least 93 deaths in Germany. At least 100 people are still missing in the state of Rhineland-Palatinate.

Any info about how the weather conditions for this happened?
You need warm and very wet air in order to form massive clouds in the first place....

4throck said:
Any info about how the weather conditions for this happened?
You need warm and very wet air in order to form massive clouds in the first place....
Click to expand...

The warm wet air came from the North Sea, while a upper level low caused the needed rapid cooling of the air to produce the rain.

Lets start with the situation before: Here is the situation when the first warnings arrived, a upper level low (HTK) over france (cold air sinks from the upper atmosphere, producing a lower pressure above), and a low pressure system (T) to the east over Austria. So far, nothing bad, but the low pressure system pumps lots of heated air from central europe over the north sea, triggering a good amount of evaporation there. The high pressure systems (H) in the north constrained the warm air even more, directing it.

For people much wiser than me, this must have been like looking into a loaded cannon. The pieces are placed on the board and will move according to their physical rules.

Here you can see the beginning of the real trouble one day later: The upper level low has moved east, while the low pressure system moved counter clockwise around it to the north. Now it is pumping warm moist air from the north sea mostly into Belgium and France. Note how stable the HTKs are - the jetstream is barely moving them around.

And now, 6 hours later, lets go to the ugly part: The low pressure system has moved further north with the upper level low and is now pumping much more moisture into the stream of cold air from above. Pay attention how little the low pressure system at ground level moved in six hours, steadily moving evaporation from the north sea into western Europe.

In the evening, the heavy rainfall shifted further into France again. The low pressure system kept on dancing counterclockwise around the upper level low, which barely moved at all.

The maps had been produced by the ZAMG, a research agency of the Austrian government.

And more fun - the river Inde has left its new artificial river bed, into which it was redirected in 2005 for extension of the Inden coal pit, and returned into its old river bed, flooding the coal pit mine.

BBC News is doing live OB from Falkensdorf? and Erfstadt.

You likely mean Valkenburg near Maastricht in the Netherlands, which is also badly hit by the flooding of the river Geul.

The large white building you can see in the drone footage is the historic castle Blessem, which got partially damaged in the flooding. Only the outer ward is still there, the original larger complex is about 700 years old. The white mansion is from 1898.

@Urwumpe thanks for the charts and explanation.
I had some climatology classes for my Geography degree, a long time ago.

Back then, one of the main unknowns regarding climate change was the effect on cloud formation and general atmospheric circulation (Jetstream, high/low pressures, etc.).
I guess we are starting to know...

Much more joy - the operators of the Hambach coal mine pumped the flood water of their pit mine into the Erft river as well, worsening the situation downstream a lot. The pumps for Hambach had recently been upgraded to permit pumping up to 450 million cubic meters of water per year, over one million cubic meters per day.

4throck said:
@Urwumpe thanks for the charts and explanation.
I had some climatology classes for my Geography degree, a long time ago.

Back then, one of the main unknowns regarding climate change was the effect on cloud formation and general atmospheric circulation (Jetstream, high/low pressures, etc.).
I guess we are starting to know...
Click to expand...

So you should know much more about it as I will ever do. I only learned some basic skills there for my secret passion of sailing...


EDIT: Do you (or somebody else) know some search terms, that I could use for finding research papers about the risk of channelized rivers returning into their old natural beds again? It seems like the old river bed still exists underground, just waiting for a strong enough force to return the river into it again.
Last edited: Jul 16, 2021 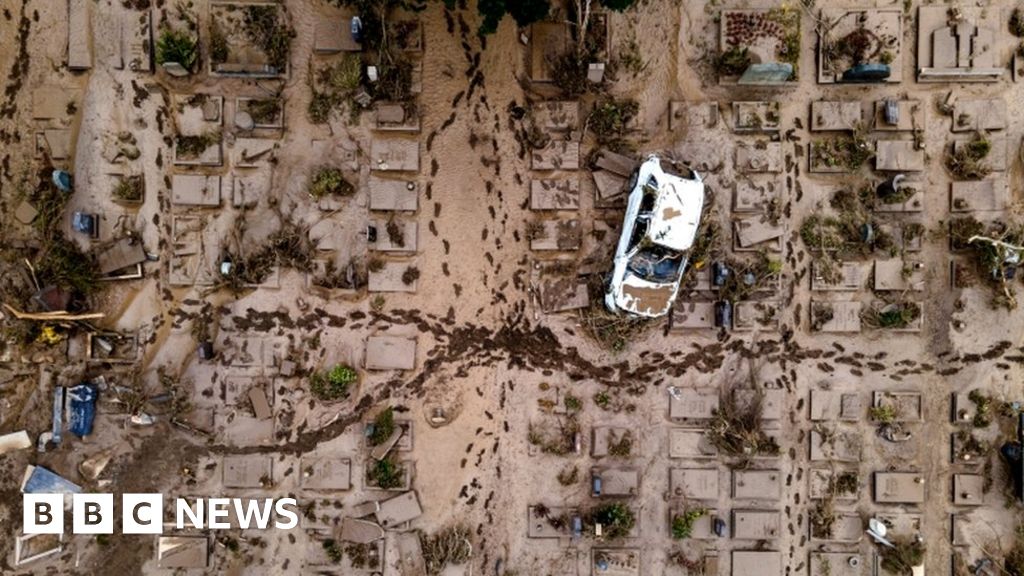 Germany floods: Where are the worst-hit areas?

Maps, images and graphics showing the heavy rainfall and flooding that has caused widespread damage.
www.bbc.co.uk
You must log in or register to reply here.