New thread for all questions related to sts procedures and missions

What does the safety briefing cover? I know shuttle crews go through one when they dock, does Soyuz? And what do they talk about in it?
D

Probably the most important thing is what to do incase of,

In the picture the SSME's off(as in not burning)? why is there light in the engines?

...and I just noticed in this one

Are those wires going to the launch tower?
probably for stability. I never noticed them before.

Bj said:
In the picture the SSME's off(as in not burning)? why is there light in the engines?
Click to expand...

Thats just reflections of light around the throat. The throat of the SSMEs is a very very small hole in a very very large nozzle (expansion ratio 77:1).

Also, the inside of the Main combustion chamber is covered with a copper alloy, if i remember correctly, for better thermal conductivity, which might explain the reddish color of the reflected light.


Bj said:
...and I just noticed in this one
Are those wires going to the launch tower?
probably for stability. I never noticed them before.
Click to expand...

That's for protecting the shuttle against lightning strikes. they go to the top of the launch tower, where the main lightning rod is.

The ISS is pretty similar to the Shuttle on the US side, but on the Russian side, Shuttle astronauts might get lost easily.

Also the safety warning might include drinking beverages from the Russian side.

Urwumpe said:
That's for protecting the shuttle against lightning strikes. they go to the top of the launch tower, where the main lightning rod is.
Click to expand...

Yes. The lightning mast is made of fiberglass and the wires is part of the catenary wire system that leads the lightning strike into the ground protecting the FSS and shuttle from harm.

quote.They also opened the Centerline Berthing Camera System on top of the Harmony module. The system provides live video to assist with docking spacecraft and modules together.


does anyone know if nasa will be broadcasting live video from the cameras?

STS-119, which will carry up the final power generating array (S6) for the ISS, is likely to slip into 2009, should the expected delays be incurred by STS-125 and STS-126. However, information points to an interesting requirement being looked at, should Discovery's flight - currently manifested for December - be required to return home before offloading the payload.

'STS-119 is performance critical (S6 truss). Team determined that for contingency payload return, they were able to implement multi-stage de-orbit and gain 500 pounds of mass in the middeck, which helps Station.'
Click to expand...

Does this mean that they lower the orbit using the OMS sometime before the de-orbit burn to reduce re-entry loads? Was this an issue for STS-97 with the P6 truss?

I have one, if you were watching the endeavour space shuttle EVA every time they went to the helmet cam it kept on stuffing up, whys that.

Does STS-123 burned at landing? If yes, what is the cause of fire at landing and its part, and why?

Clue: All astronauts survived and not in fire on the whole Space Shuttle Endeavour.

what are you talking about? i dont think there was a fire.

Oh i forgot to add, i dont think there has been a fire on a space shuttle, only for challenger and columbia during the accident but thats not really a fire, shuttle like a abort tower its never been used by the US (the Russians used a abort tower once)
U 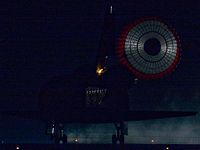 Endeavour rolls out after touchdown.


Flight controllers gave a no-go on de-orbit for the first landing opportunity at 23:05 UTC (19:05 EDT), due to unfavorable weather conditions at the Shuttle Landing Facility at Kennedy Space Center.[28]
Weather conditions were acceptable for the second landing opportunity, planned for 00:39 UTC 27 March 2008 (20:39 EDT 26 March 2008). The landing occurred at the Shuttle Landing Facility, and was the sixteenth night landing of the Space Shuttle at KSC , 22nd Shuttle night landing overall. Coincidentally, this mission also began with a night launch.
The second landing opportunity was a complete success with main gear touchdown occurring at 20:39:08 EDT (00:39:08 UTC 27 March 2008), nose gear touchdown at 20:39:17 EDT (00:39:17 UTC 27 March 2008), and wheels stop at 20:40:41 EDT (00:40:41 UTC 27 March 2008), completing the STS-123 crew's 15-day, 18-hour, 11-minutes, and 3-seconds space voyage.
The exhaust produced by the Hydrazine Gas Generator APUs on either side of Endeavour's tail fin created concern among some observers that something was amiss, as it appeared more pronounced than usual in NASA's visual light cameras.[29] However this exhaust is normal and expected. The three Hydrazine Gas Generator APUs are activated 5 minutes before the deorbit burn and are running for 5 min. after wheels stop. The monopropellant hydrazine is changing phase due to a catalyst and reach 1,700°F (927°C).[30] The hydraulic power is needed for the shuttle's rudder/speed brake, elevons, body flap and landing gear during descent, and for the main engine nozzles' gimballing during ascent. Each of the Solid Rocket Boosters have two similar Hydrazine Gas Generators for their nozzle gimballing.
Click to expand...

It wasnt a fire, it was just gas.

ryan said:
It wasnt a fire, it was just gas.
Click to expand...

ryan said:
So it wasnt a fire.
Click to expand...