The addon is not complete. You should be able to...
Click to expand...

Read more about this addon...

In short, it's flyable but incomplete, therefore I release it under "resources" so that others might help finish it.

4throck said:
In short, it's flyable but incomplete, therefore I release it under "resources" so that others might help finish it.
Click to expand...

Didn't somebody in the francophone forum have interest there?

And which licence did you pick there?

Urwumpe said:
Didn't somebody in the francophone forum have interest there?
Click to expand...

Yes, it was discussed as a possible part of the Kourou/Ariane addon. I'd welcome that!

Urwumpe said:
And which licence did you pick there?
Click to expand...

I don't care much about licences. My orbiter specific conditions are explained in the description:

"You'll be credited as co-author on a future release. Likewise, if you complete and release it, list me (4throck) as co-author.
You are allowed to finish it and release it as an add-on for Orbiter 2016, provided you credit me for the 3D mesh and initial development, but the addon must be realistic (that is, realistic physical parameters and mission profile are used, and the addon is complete enough so that you can perform a full mission - launch, dock, landing). I also allow it to be distributed with other addons (ex: Ariane 5) provided the same realistic conditions are met."

I know there were an old Hermes addon for Orbiter 2006 (as far as i remember). You'd be able to find it on Pappy's Hangar (french site to download Orbiter addons). I don't know if the airflow is usable, but well... it exists.

Does somebody still know which persons had been responsible for the aerodynamic configuration of Hermes? Maybe I can find some engineering papers in a universities library. I know that the coarse numbers for Hermes are quoted in numerous publications of the 90s.

Otherwise, I would need to start the research at basically zero there.

Found some old DLR report, maybe I can ask for it, Braunschweig and Göttingen aren't far away for me for taking a look.


EDIT: This one might be exactly what is needed for giving this spaceplane proper aerodynamics, it compares the important coefficients (which we need for Orbiter) between experimental (wind tunnel) data and computer simulations. One of the authors was professor for computational flow dynamics at the University of Braunschweig while I studied there - not really helpful for getting the document, but it makes me sure this paper contains the needed data. Found quite many old names from my time as apprentice at the DLR while searching for interesting documents.

@Urwumpe That stuff is way beyond me, but it would be great if you could "translate" mass/aerodynamic parameters from there.
I think I modeled all of the aerodynamic surfaces as separate mesh groups ...

4throck said:
@Urwumpe That stuff is way beyond me, but it would be great if you could "translate" mass/aerodynamic parameters from there.
I think I modeled all of the aerodynamic surfaces as separate mesh groups ...
Click to expand...

I'll first of all try locating the document, its not available in digital form. Maybe its archived somewhere nearby, the DLR headquarters are just one hour in my car away.

This message will destroy itself in 10 seconds....


I have no idea about how to implement such coefficient functions into Vesselbuilder, maybe there is a mission following it....

The mesh largely represents the aerodynamic shape "Forme 294", of the 1990 8R1 (1.0) configuration. Only one nitpicking error there: The airbrake panels are too small. Otherwise, it fits perfectly to the ESA illustrations of that time and the scale model created by Jean-Marc Deschamps (Possibly not THE Jean Marc Deschamps we know from some successful movie productions).

There are some differences to the intermediate A configuration, that turned out to be the last one (Like a much simpler RCS configuration and some aerodynamic optimizations) The planned final version 2.0 was never reached.

I based the model on two detailed matching orthographic views and photos of physical mockups. Details lined up nicely between these sources, so it seemed like a "stable" design configuration. My goal was more artistic than following any specific configuration.
I had a similar situation with Constellation - the best visually documented version was an intermediate one.

4throck said:
I based the model on two detailed matching orthographic views and photos of physical mockups. Details lined up nicely between these sources, so it seemed like a "stable" design configuration. My goal was more artistic than following any specific configuration.
I had a similar situation with Constellation - the best visually documented version was an intermediate one.
Click to expand...

Yeah, I just had to compare to be sure, which state of things had been used there and which technical papers relate to it. For example, while a 272 configuration might appear close, its a completely different spacecraft. Or the X-2000 subproject, which tried to cut the costs after things already collapsed. Personally, I would prefer the A configuration since it is really appearing like the more complete spacecraft (for example, it covered MMOD protection and many habitability issues).

The Hermes book is really good, while I remember some of the public statements about why the program failed ("French pet project", "German government wanted Sänger II"), I so far lacked the details, like how strong Ariane 5 performance and Hermes mass diverged during the project.

I created a new public repository on github for a "fork" of this one, for keeping things a bit more organized than just leaving "breadcrumps" of information everywhere. I am still in the process of settings things up, but if you have any complaints or suggestions, just tell me now. I'll keep on doing some small stuff here during the next days. 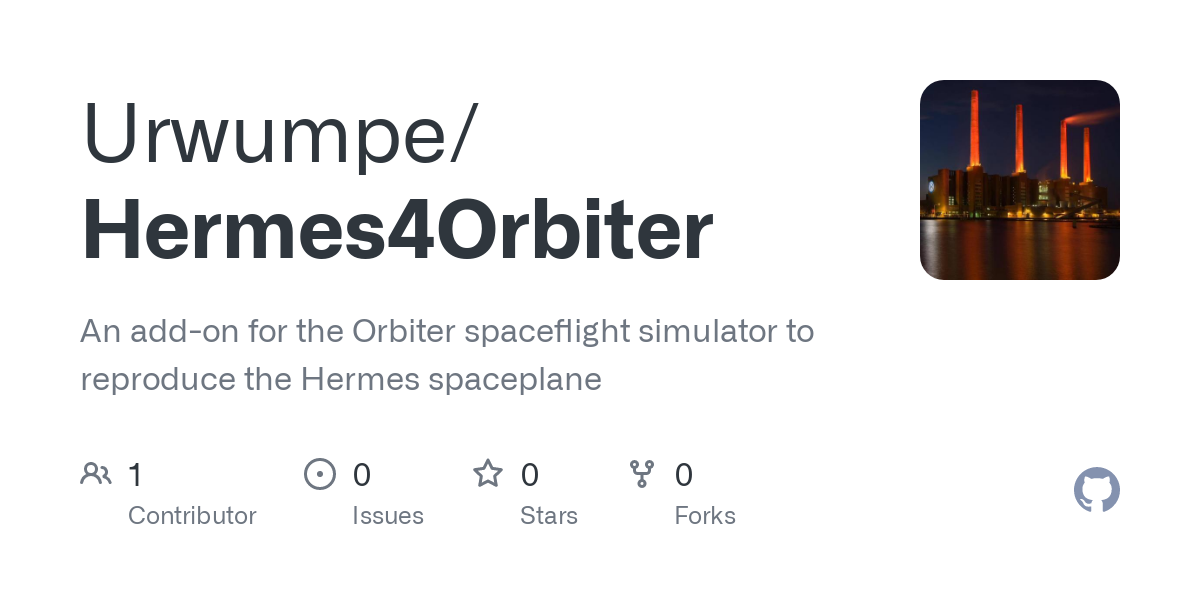 GitHub - Urwumpe/Hermes4Orbiter: An add-on for the Orbiter spaceflight simulator to reproduce the Hermes spaceplane

@4throck Its on MIT licence, I'll add your co-author (or what ever you like more) there to the documents as soon as your files get integrated there. Do you have a github user or handle to reference you there?

Istres surface tile and base

Added surface tiles and hangar blocks for the Itres base.
View attachment 29441
Click to expand...

Read the rest of this update entry...

This addon has been removed and is no longer available.