The launch has already happened, and it was okay. Does anybody want me to supply more info?

Meridian series satellites serve as a part of the United System of Satellite Communications 2nd generation (USSC-2) used by various governmental agencies of Russia, including the armed forces. Placed in a Molniya orbit, it provides high latitude transponder coverage, while Raduga class satellites residing in the GEO, provide global coverage. Meridian is viewed upon as a replacement for the older Molniya-3 spacecraft class.

It is believed to have a pressurized hull part and overall design similar to Uragan-M class satellites that are currently employed as the mainstay of the GLONASS navigation system. Unlike Molniya series that only worked in the solar-facing attitude, the Meridian has full 3-axis stabilisation and rotating solar arrays.

In the middle of 2006, the Russian government released a transcript of the Security Council meeting in Kremlin, which quoted Russian Ministry of Defense Sergei Ivanov as saying that flight tests of the new Meridian spacecraft were scheduled for no later than the 4th quarter of 2006, with the goal of upgrading the telecommunications segment of the military command and control system. (Transcript Moscow, Kremlin, June 20, 2006.)

According to unofficial postings on the web, the Meridian satellite is equipped with a pressurized service module and a three-axis attitude control system. Some of the systems, including onboard flight control computer and propulsion might be similar to those developed for the Uragan-M navigation satellite. The spacecraft also sports solar panels capable of rotating themselves toward the sun, along a single axis.

Both, Uragan and Meridian satellites were developed at NPO PM in Zheleznogorsk, where the latter project apparently originated back in 1978. NPO PM developed absolute majority of Russian spacecraft for telecommunications and navigation, both military and civilian.

As with Uragan satellites, the production of operational Meridian satellites was apparently subcontracted to PO Polyot in the city of Omsk. During several aerospace exhibitions in Russia circa 2001, the organization released a photo of a satellite, which was advertised as “new” Molniya, which is a communications satellite, operating in the highly elliptical orbit. At the time, sources at PO Polyot told reporter with the Kommersant newspaper Ivan Safronov (R.I.P.) that the spacecraft had already been built but had little chance of getting off the ground due to lack of funds.

Meridian-1, not given a Cosmos designation, launched on December 24, 2006. Two and half years later, during the coverage of the second Meridian launch, the head of NPO PM (then remaned ISS Reshetnev) Nikolai Testoedov told Russian media that the first Meridian satellite failed before the end of its projected lifespan. He blamed a collision with space junk for the premature demise of the spacecraft.

According to the official Russian sources, the launch vehicle successfully delivered the satellite into orbit at 04:13 Moscow Time. The spacecraft established contact with the ground and its systems worked well, the Russian space forces reported. However, western radar found the Meridian and its Fregat upper stage in the 275 by 36,473 and 191 by 36,377-kilometer orbits. Independent observers noticed that these parameters, especially perigee, were considerably lower than those of the original Meridian satellite, inserted into a 1,009 by 39,818-kilometer orbit. Also, the perigee of the spacecraft was within a range of altitudes, where the friction of the upper atmosphere could quickly degrade the satellite's orbit, unless maneuvers to raise it were taken urgently.

A respectable source on the Novosti Kosmonavtiki forum reported that preliminary data indicated the shutdown of the third stage of the launch vehicle three seconds earlier than planned. The Fregat upper stage apparently made an attempt to compensate the underperformance of the third stage with its own extended burn, until it run out of propellant.

As it transpired in the first half of June 2009, the investigation commission traced the problem to an erroneous input of data about the payload into the flight program, as a result of poor interaction between the customer and the developer. It led to overuse of propellant during the first and second burns of the Fregat upper stage (not the third stage of the Molniya rocket as was originally reported.) At the end of the second burn of the Fregat engine, it was shut down prematurely based on the propellant level data. Fortunately, the third (aborted) engine burn was expected to be very short, consuming the amount of propellant just enough to ignite the main engine. The problem during the insertion triggered the separation of the upper stage and its payload, as it was designed in case of emergency.

|“Soyuz-2” launch vehicle is a current generation R-7 family launch vehicle. It is a replacement for “Soyuz-U”, “Soyuz-FG” and “Molniya-M” launch vehicles. “Soyuz-2” launch vehicle with “Fregat” upper stage can launch spacecrafts to various orbits: low, medium, high elliptical, sun-synchronous, GTO and GSO. Its main distinctions from the Soyuz-FG are new injectors on Stage I-II eniges, a digital flight control system, digital data downlink, deorbitable stage III and a new payload fairing. It's capable of launches from modified R-7 launch complexes. The introduction in 2004 of the Soyuz 2-1a launch vehicle performed represents a major step in the launch vehicle evolution program. This modernized version of Soyuz, which was also used to successfully launch MetOp-A on October 19, 2006, implements a digital control system providing additional mission flexibility and will enable control of the launch vehicle with the 4.1 m ST fairing. 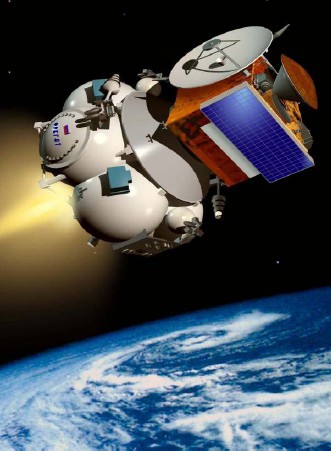 Flight qualified in 2000, the Fregat upper stage is an autonomous and flexible upper stage that is designed to operate as an orbital vehicle. It extends the capability of the lower three stages of the Soyuz vehicle to provide access to a full range of orbits (LEO, SSO, MEO, GTO, GEO and escape). In order to provide the Fregat with high initial reliability, several flight-proven subsystems and components from previous spacecraft and rockets are incorporated into the upper stage. The upper stage consists of 6 spherical tanks (4 for propellants, 2 for avionics) arrayed in a circle, with trusses passing through the tanks to provide structural support. The stage is independent from the lower three stages, having its own guidance, navigation, control, tracking, and telemetry systems. The stage uses storable propellants (UDMH/NTO) and can be restarted up to 20 times in flight, thus enabling it to carry out complex mission profiles. It can provide the customer with 3-axis stabilization or spin-up of their spacecraft.

The vehicle's reliability statistics according to http://www.spacelaunchreport.com/reliability2010.txt: 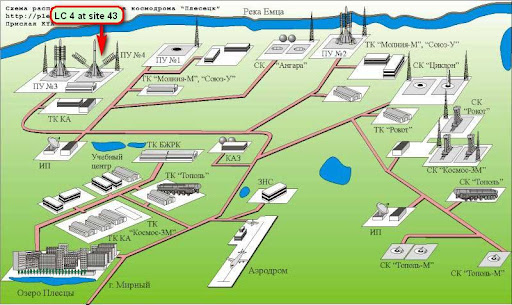 After a 9 min long boosting stage, the payload assembly is put into 62.8° inclined initial orbit with mean altitude of 210 km. After a 15 min long coasting, a second Fregat's 613 seconds long burn puts the payload into a transfer orbit. After reaching the apogee, the orbit's shape is finalized.

The only one by Zvezda channel with Russian narration is available:

well, if you don't mind. I like reading about it

Of course. Ideally so much information that we can make an add-on of it.

A correction: The translation of "Meridian" is "Meridian".

Do you already have a Kosmos number for it?

Urwumpe said:
Do you already have a Kosmos number for it?
Click to expand...

Should be Kosmos-2470, but no official acknowledgment has been released yet. And it's even more interesting that no TLE's for today appear as well...

The satellite separated from the Fregat launch vehicle stage at 03:13 UTC.
Click to expand...

The Meridian communications satellite built by ISS-Reshetnev was successfully delivered into orbit on November 2, 2010.

The satellite was launched aboard a Souz-2.1a rocket according to plan. The first communications with the spacecraft have been effective. All the satellite’s onboard subsystems are functioning properly.

Well, I almost dare to say: if NORAD can't see it, it's a problem of NORAD.

NORAD is usually very reliable... the North Korean satellites are also never visible for NORAD - and all others.

Urwumpe said:
NORAD is usually very reliable... the North Korean satellites are also never visible for NORAD - and all others.
Click to expand...

But the quote above is from ISS Reshetnev website - they are satellite producers and don't usually publish lies (unlike Roscosmos primary website whose writers are at times as critical about information sources as a pig about slops).

Also, this year there had been a period when NORAD stopped publishing TLE updates for several days (which assumingly meant that only the public service was disrupted, of course).

Most likely the public TLE are not available instantly.

There are elements! :woohoo: