Good day or night (good time maybe?) everyone! Figured I'd make a separate thread for further development of the MS2015 Saturns for O2016. This version will be a very bare bones release, but something none-the-less that can be built upon in the next decade as new add-ons are created to replace the obsolete ones from Orbiter 2006 and Orbiter 2010.

The plan is to have examples of different Saturn variants with dead-weight payloads in place of a real payload. This is essentially the booster studies section of the last version, as AAPO doesn't work with O2016. The only planned 3rd party dependency will be NASSP 7 for the meshes for the Saturn IB and Saturn V. Any other meshes I need will be cloned from Velcro Rockets and Velcro Saturns with permission from sputnik. The only other dependency is the short Centaur G from the Orbicomm 0.86 by n_molson. I wonder if I could get permission to clone that too as I'm unsure of Orbicomm's compatibility with Orbiter 2016, I still need to do some tinkering. All I know is that I don't plan on taking literally years of procrastinating to finish this.
Last edited: May 1, 2018

I got permission for the Titans, and from the messages we exchanged, I'm sure sputnik doesn't mind the Saturns being used.
But you should contact him anyway

If you can, try to get permission for the other meshes. Better have no dependencies at all!
I don't think there's a problem in cloning stuff, if your goals are to do a similar add-on, BUT some people do mind.

Ah, it was Sputnik who made Velcro Rockets. My bad memory has failed me again. I need to fix my previous release of MS2015 Saturns again. I’ll get right on fixing that.

Did a test with SA-1, the very first launch of a Saturn. We have a live S-IV! They are at real speed and with side-by-side views when possible.
May help you to tweak exhaust, separations, etc. :thumbup:

Thanks for those films! I've never seen them presented like that outside of short snippets in documentaries. I simulated the exhaust from the LOX/RP-1 burning engines but I never bothered to add the big plume that they all created behind the rocket. The original Multistage2 Saturn INT-21 from the Skylab1973 add-on had it simulated so I might draw from that and modify it as needed. That original ini file was essentially the common ancestor of all the Saturn related Multistage2015 ini files that I've created over the last 2 and a half years. Backwards engineering that file taught me how to do all this.

No pressure in adding those effects.
It's just a suggestion, because they will make these test flights interesting.

The plume was a trademark of the Saturn, so it's worth trying to add it.

There's a small aerodynamic shockwave effect at max-q. Not as visible as on the shuttle, but here's a photo:
https://upload.wikimedia.org/wikipedia/commons/a/ac/Apollo_11_launch.jpg


(My videos are put together from the original documentaries and some documentation. There's lot of interesting stuff spread over many film and sound archives )
Last edited: Apr 30, 2018

The plume has been simulated, as well as flame trench effects, and more realistic mach and LOX venting effects.

I've also simulated growing particles and added the complex line into the launches that use the smart guidance. It's nice to have the motivation to create again.

Can you edit your title please?
There's an "l" missing from Mutistage2015

LOX venting and ullage motors are now simulated for the S-IV. That's good! All those small details add up to a nice experience

Thanks I was able to load the LC 39 pads and they look super. Your right about Apollo 5 and I moved it over to pad 34 and its not on the pedestal it still looks good. you might think about moving pad 34over to 37 and adding lights.
pressing F did sep the fairing from Apollo5 but not from the Apollo 7 or the moon flights

The latest version of NASSP, NASSP 7, has LC-37 built into the scenery of its Sol system. If you've kept the scenarios for AS-203 and Apollo 5 untouched with the System set as ProjectApollo/Sol, you should see this when the scenario loads: As for separating the CSM, you would have needed to have read up on the key commands for the AAPO add-on. With the focus on the Multistage Rocket, press the J key to separate the CSM as a payload. The focus should automatically shift to the CSM. On the Apollo, pressing Ctrl+J will separate the CSM from the SLA panels.

For future technical questions or issues with the 2010 version of this add-on, please post them either in the comments section of that version or post them in the development thread for the 2010 version which can be found here: https://www.orbiter-forum.com/showthread.php?t=36365.

For those who were asking me about using the new AMSO with Multistage 2015: 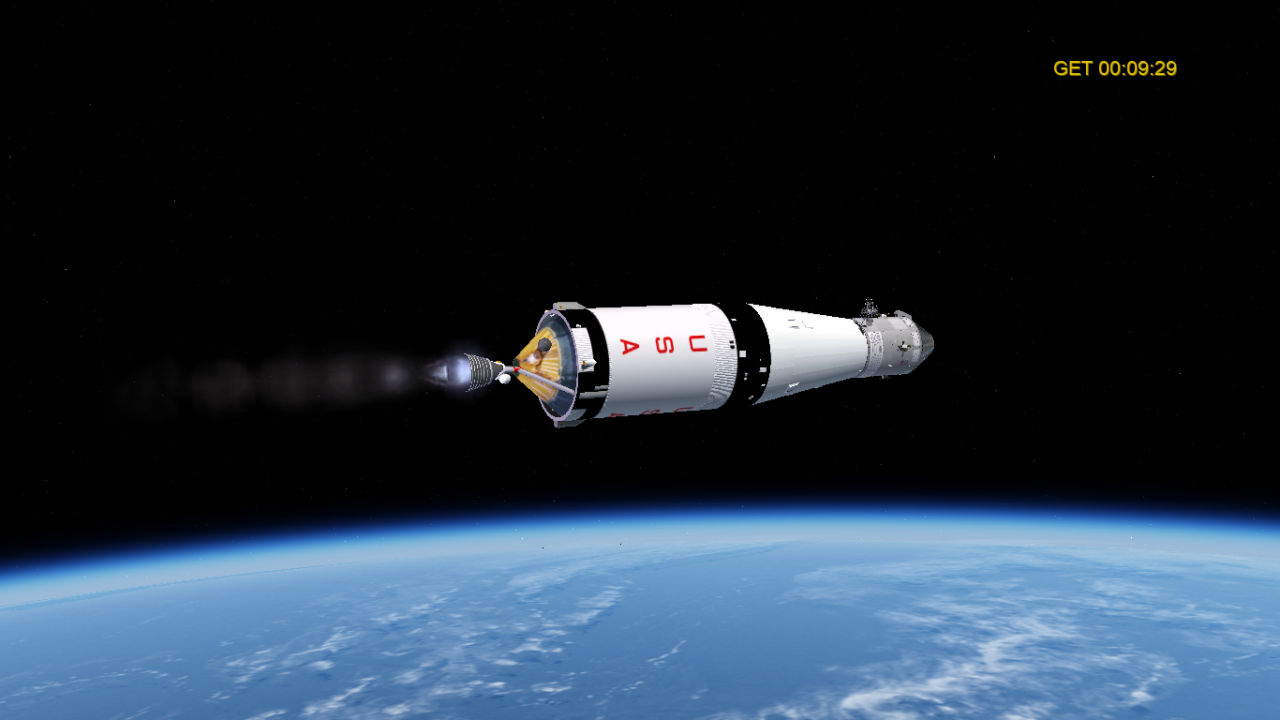 Apollo 7. So I guess I'm working on this again, stay tuned.

You can, in fact, have both a LES and a fairing on a Multistage2015 vehicle. The SLA and LES tower are from Velcro Saturns.

I've made available a Saturn Ib that works with AMSO (https://www.orbiter-forum.com/showthread.php?p=601771&postcount=79 )
but I'm looking forward for a more complete addon for the Saturn family.

Ah, it never occurred to me to use the LES from NASSP, the one from Velcro is a tad too small. Shame that launch aborts with the tower aren't possible with MS2015, but oh well, the other abort modes that use the SPS engine work well enough. I'll work on some Saturn IB Apollo launches and then I'll work on the Saturn V.

The SLA panels are giving me a headache currently. Half of them don't eject in the correct direction. 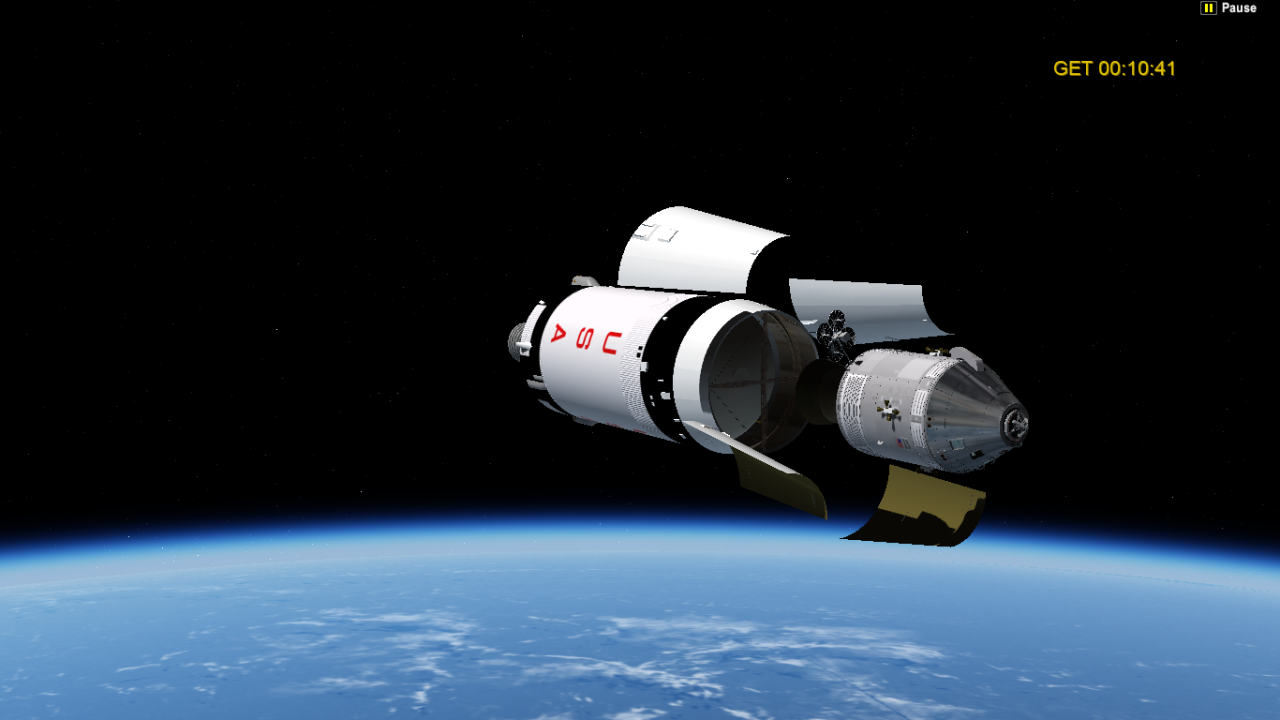 Here is my line of code for the panels:


Code:
I don't know why they're off rotation by 45 degrees either, changing the angle from 0 to 45 doesn't seem to change their position either. I think I'll use your panels that you did for the Apollo Collab. 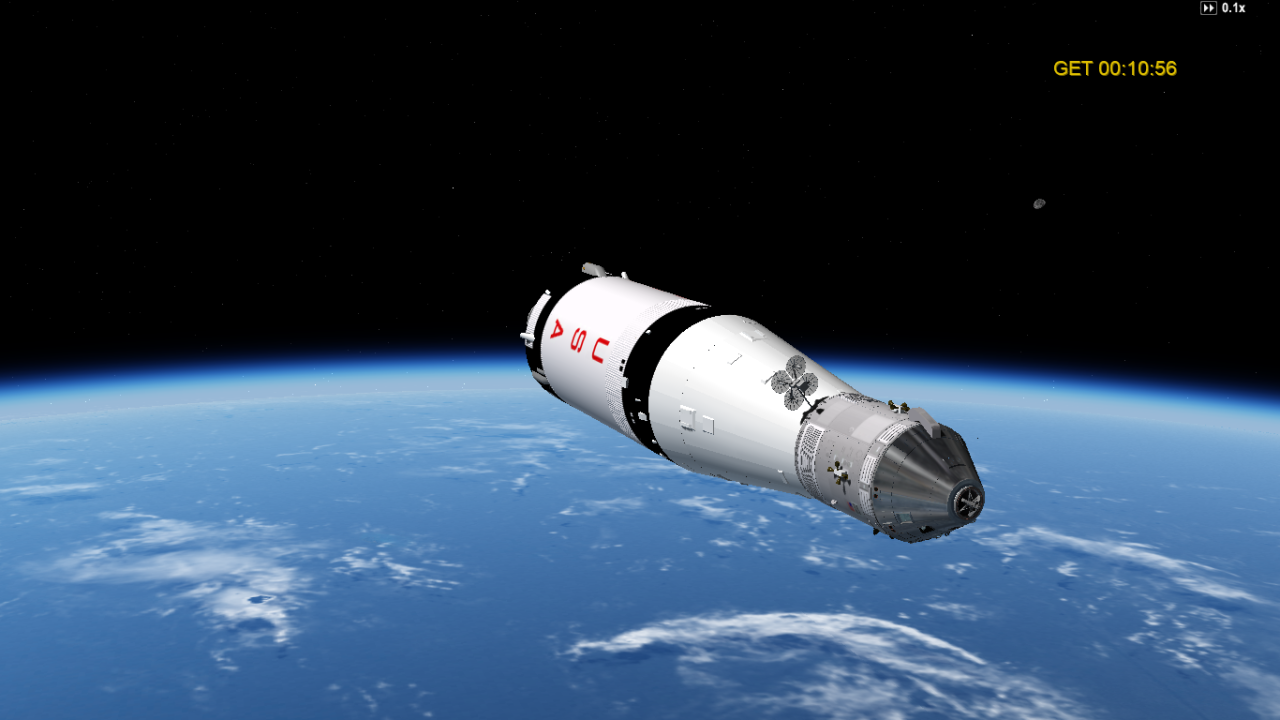 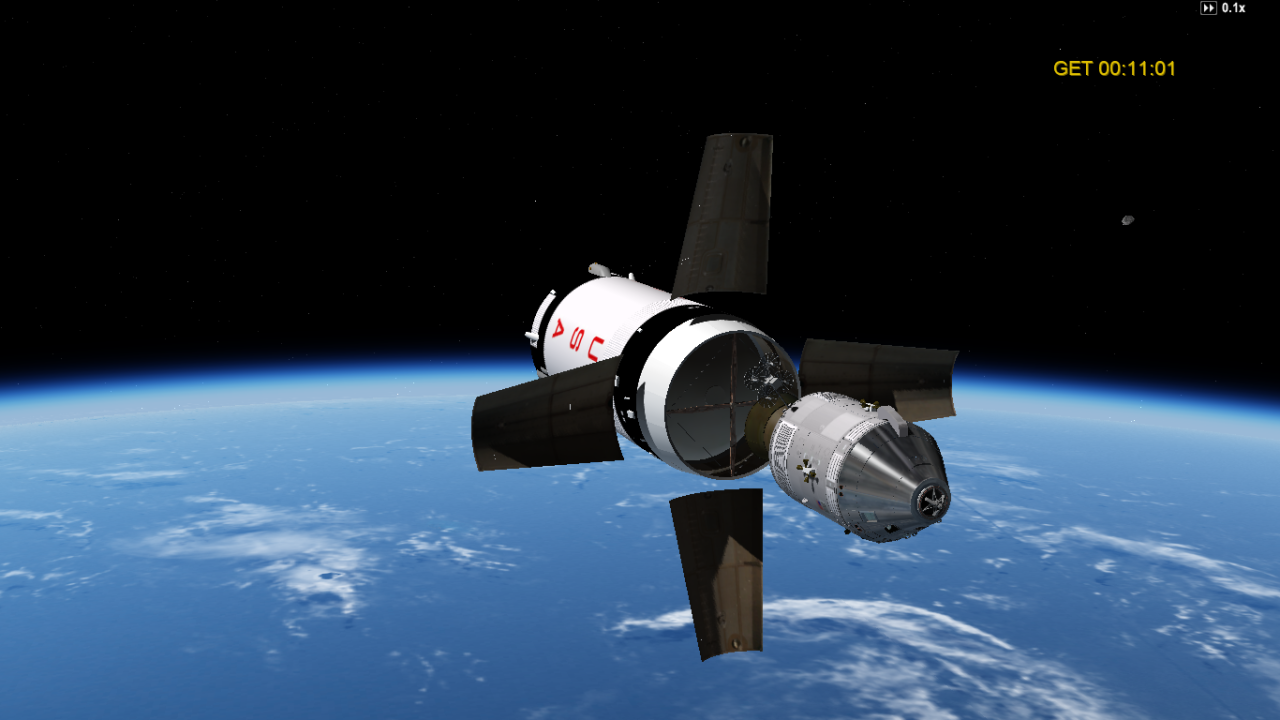 I removed the docking probe since Apollo 7 was not a docking mission. I'll get the unmanned AS-201 and 202 missions squared away, will throw in a Skylab mission, and then crank away at the Saturn V.

I noticed in the mesh folder for NASSP that there was a Little Joe model. I figured I could have some fun with that and loaded a test scenario and...well... 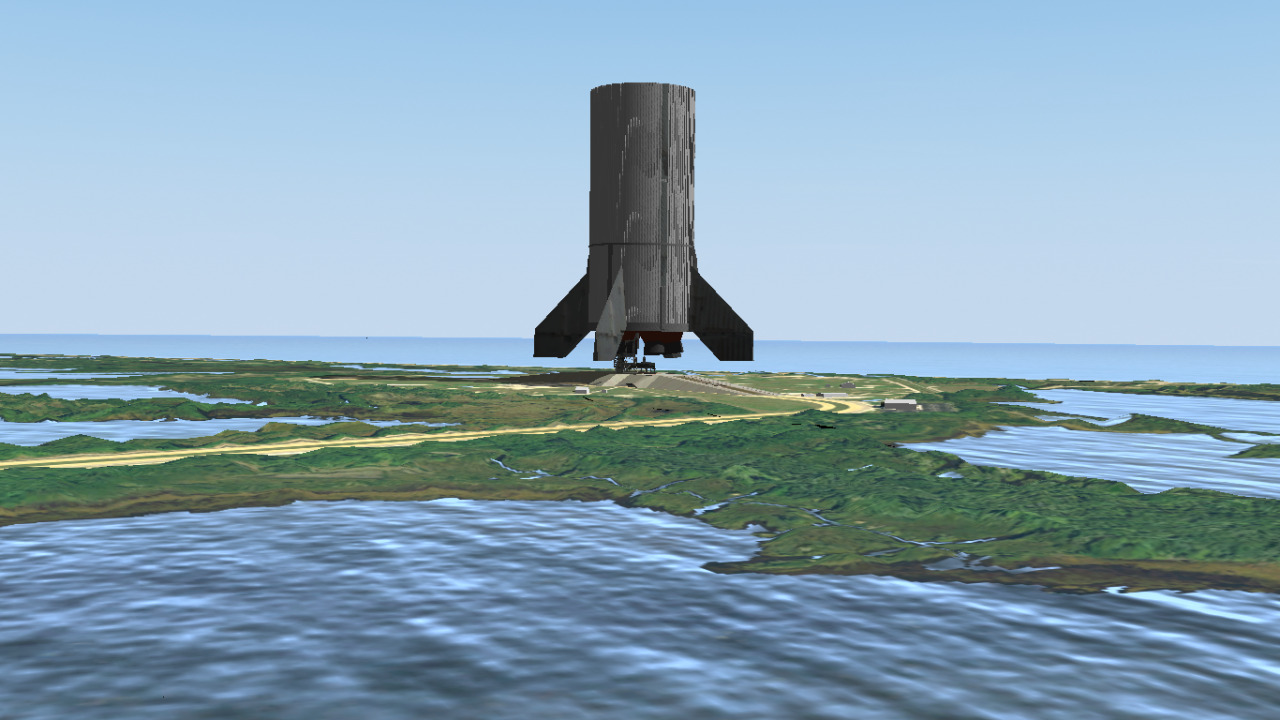 Oh dear. Yeah, nevermind then. I would have loaded in a LES tower as a second stage as sort of a rough way to simulate a Little Joe abort test but that's not exactly happening with this guy.

AS-201 and AS-202 are done. Did some fiddling with the ini files and added flame trench effects and made the first stage exhaust plumes more appealing. I’ll do a Skylab mission next, this is a little trickier since I like to get the insertion parameters just right for a nominal rendezvous, I’m particular about that. I’ll also work on some Saturn V scenarios when I can.

I think NASSP meshes are the way to go, since it's a good 2016 add-on. And you get the launch pads.

With Velcro is that people might end up with a lot of non functional scenarios and configs.
Of course you can always say on the read me "only copy textures and meshes"

Yes, those panels are a pain, that's why I made a copy. I don't think there's a problem with that, for all intents and purposes those meshes are still NASSP, not mine.


Feel free to use my Skylab B stuff (Skylab B, LEM and CM derived modules). I'll probably update scenarios for those myself, but if you want them as test cargo or something, go for it.
Last edited: Jan 19, 2020 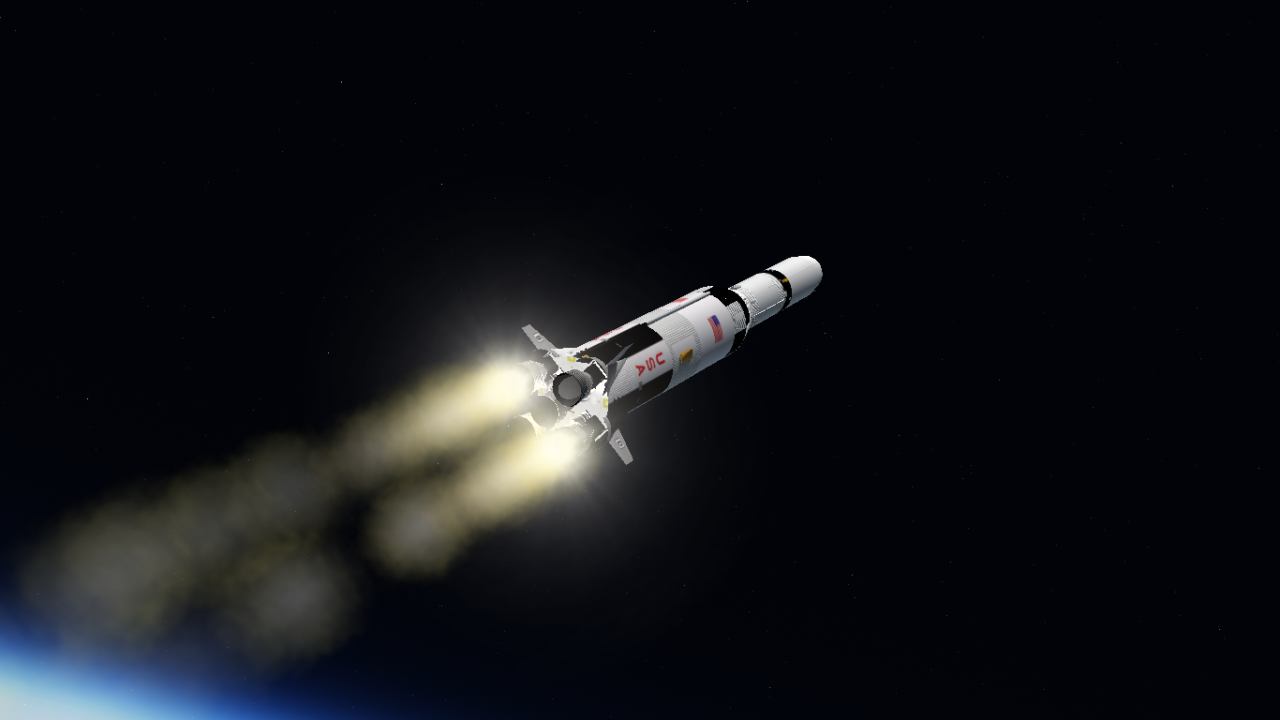 The Saturn INT-20. I learned recently that the 5 engine variant would shut down 3 of the engines at 88 seconds, this was to prevent high g-loads late in the S-IC burn.

Currently working on a separate Sol for this add-on, current name of it is Apollo_Applications_Project. I plan on incorporating the launch complexes from NASSP to add a little bit of visual flair to the add-on.
You must log in or register to reply here.