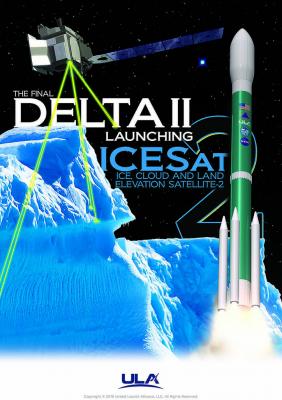 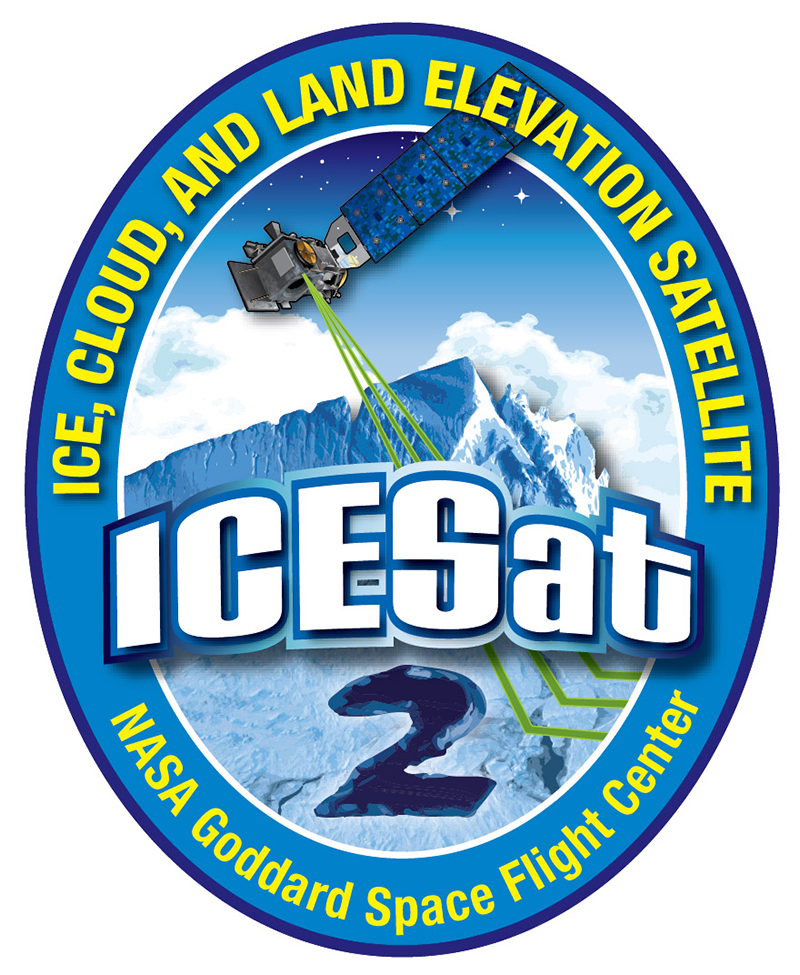 The spacecraft will lift off from Space Launch Complex 2 (SLC-2) at Vandenberg Air Force Base in California on the final launch of a United Launch Alliance Delta II 7420-10 rocket.

The rocket will deliver the Ice, Cloud and land Elevation Satellite-2 (ICESat-2) spacecraft to a 250 nmi (463 km), near-circular polar orbit..
Click to expand... 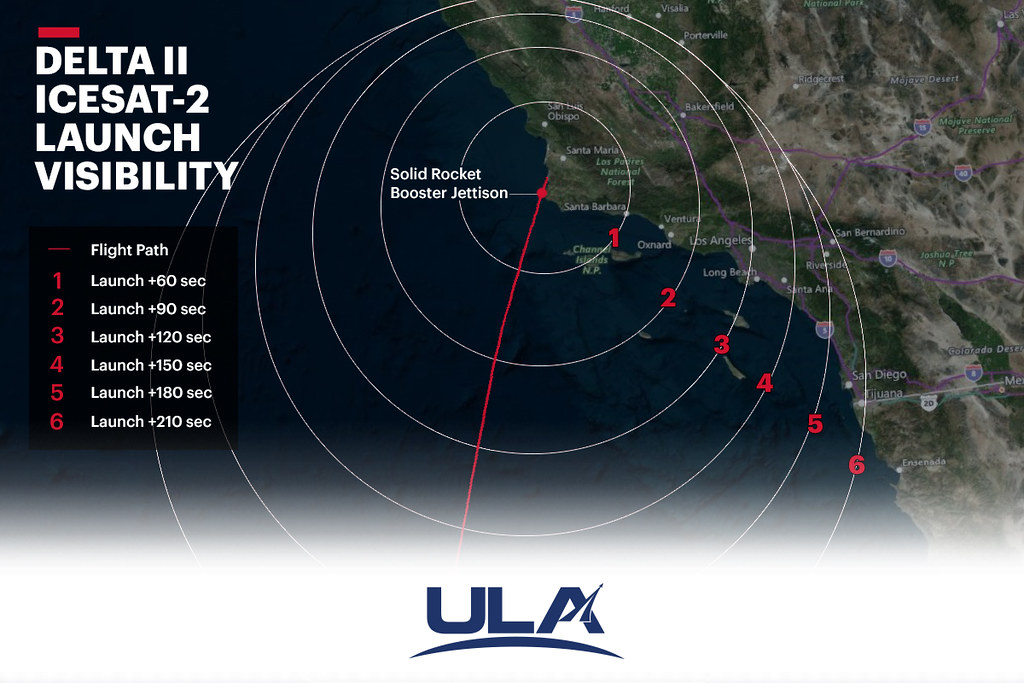 The Ice, Cloud and land Elevation Satellite-2, or ICESat-2, will measure the height of a changing Earth – one laser pulse at a time, 10,000 laser pulses a second. Slated for launch in 2018, ICESat-2 will carry a laser altimeter that detects individual photons, allowing scientists to measure the elevation of ice sheets, sea ice, forests and more in unprecedented detail.
Our planet's frozen and icy areas, called the cryosphere, are a key focus of NASA's Earth science research. ICESat-2 will help scientists investigate why, and how much, our cryosphere is changing in a warming climate. The satellite will also measure heights across Earth's temperate and tropical regions, and take stock of the vegetation in forests worldwide. 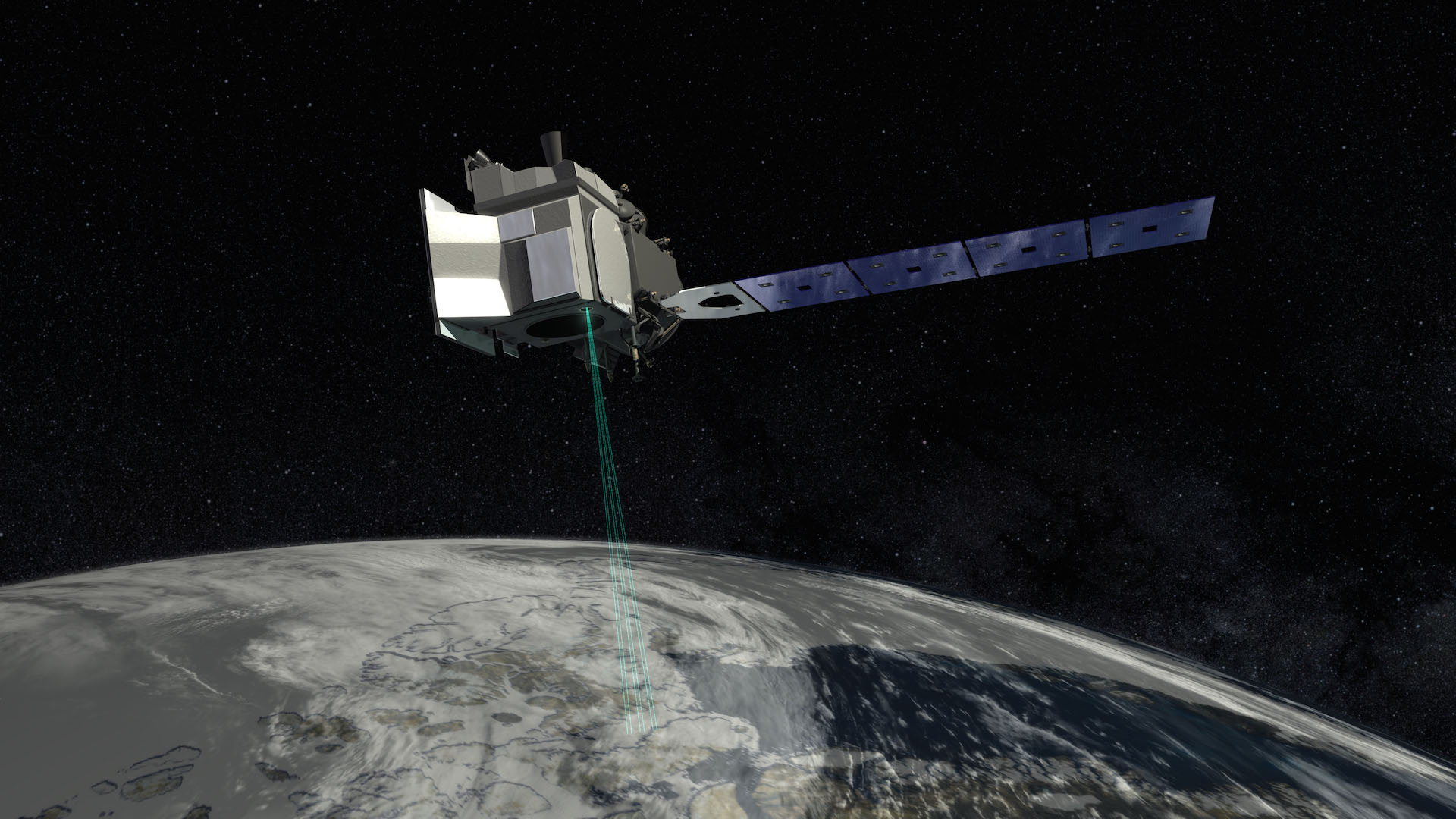 ICESat-2 will carry a single instrument, the Advanced Topographic Laser Altimeter System, or ATLAS. ATLAS has a single laser, split into six beams and arranged in three pairs to better gauge the slope of Earth's surface. Mechanisms on board precisely time the round-trip of laser photons as they leave ATLAS, reflect off the ground and return to the receiver telescope. By matching those times with the satellite's precise location in space, mission scientists will be able to determine the heights of Earth’s surface.


With 10,000 laser pulses per second, this fast-shooting laser technology allows ATLAS to take measurements every 28 inches along the satellite's path. The mission will gather enough data to estimate the annual height change of Greenland and Antarctic ice sheets to within 4 millimeters – the width of a No. 2 pencil.


ICESat-2 advances our laser technology from the first ICESat, which was launched in 2003 and operated until 2009. While ICESat-2 will carry ATLAS, the first ICESat carried the Geoscience Laser Altimeter System (GLAS) instrument – the first laser-ranging system that made continuous Earth observations. The single-beam GLAS laser fired 40 pulses a second in infrared light, taking measurements every 170 meters along the satellite's track on Earth's surface. As a comparison, if the two instruments took measurements over a football field, GLAS would have collected data points outside the two end zones, but ICESat-2's ATLAS would take measurements between each yard line.

In its three-year design lifespan, ICESat-2 will document the ebbs and flows of ice sheets, the shrinking or growth of sea ice, the height of the world's forests and more. When data from ICESat-2 are combined with what scientists have learned from the first ICESat and Operation IceBridge, an ongoing aerial campaign that started in 2009, researchers will be able to track the cryosphere for a 16-year span.

With the new technological advancements that ATLAS will bring, the ICESat-2 mission is designed to accomplish four science objectives:

A trove of videos from Goddard SFC! :lol: 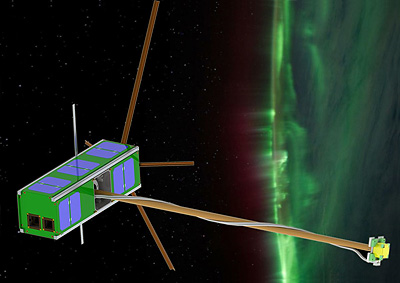 ELFIN (Electron Losses and Fields Investigation) or ELFIN A is a 3U cubesat mission under development by the Earth, Planetary, and Space Sciences department at UCLA in collaboration with the Aerospace Corporation to explore the mechanisms responsible for the loss of relativistic electrons from the radiation belts.

ELFIN is a spin-stabilized 3U CubeSat with a science mission to explore electron precipitation in the radiation belts. ELFIN spins like a hammer spinning head over handle to be able to resolve the full range of pitch angles.
ELFIN carries three different dedicated scientific instruments to be able to measure electron precipitation in the radiation belts:


The science instruments are being developed by UCLA staff at the Institute for Geophysics and Planetary Physics (IGPP) and the Earth, Planetary, and Space Sciences department (EPSS).

ELFIN* (ELFIN-STAR, Electron Losses and Fields Investigation’s Spatio-Temporal Ambiguity Resolver) or ELFIN B is a twin mission of ELFIN. It was selected in 2018 by NASA to be launched as part of the ELaNa program on the same flight as ELFIN. 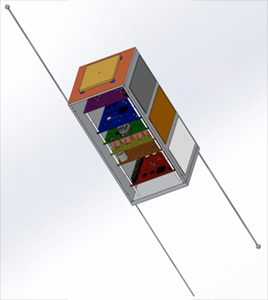 The SurfSat (Surface charging Satellite) is a 2U CubeSat mission developed at the University of Central Florida (UCF) to measure plasma induced surface charging and electrostatic discharge.

It will take in-situ measurements of the ground current waveforms from chosen common spacecraft dielectric material samples, measure the spacecraft and material potentials, and will use a Langmuir probe system to measure the ambient plasma environment.

Spacecraft in low-earth orbits, including both Geosynchronous and Polar orbits, are likely to experience charging issues due to the ambient plasma environment. The space radiation environment in Earth’s atmosphere is filled with hot and low-density plasmas that can cause charge to build up on spacecraft surfaces, resulting in high differential voltages and subsequent electrostatic discharges. If the exposed spacecraft materials are not properly bonded, differential charging can occur which can result in unwanted and damaging electrostatic discharge events.

It was selected in 2015 by NASA to be launched as part of the ELaNa program. 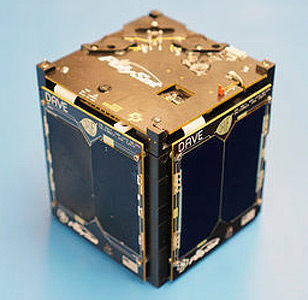 CP 7 or DAVE (Damping And Vibrations Experiment) is a collaboration between Northrop Grumman Aerospace Systems and PolySat. The payload is a particle dampening experiment designed to measure its frequency response in microgravity.

PolySat is developing a 1U CubeSat for this technical feasibility demonstration, which may lead to future applications in spacecraft vibration mitigation. Particle dampeners hold the promise of providing superior performance at a reduced cost compared to existing technologies.
Particle dampers are mechanical damping devices that consist of an enclosed cavity filled with particles. When the particles are subjected to vibration the momentum exchanges and frictional forces of these particles create a damping effect that can be optimized to suit a number of applications over a broad frequency and amplitude range. In space based applications, these particle dampers could potentially serve as a robust and simple device to eliminate jitter in optical assemblies or other sensitive scientific equipment. However, particle dampers have never been tested in a microgravity environment, and modeling their performance in microgravity proves problematic, as their effectiveness is highly nonlinear and dependent on orientation with gravity.

The proposed experiment provides data to characterize two variations of these dampers under microgravity conditions. Their performance will be compared to a control and ground based test. The experimental set up consists of the two particle damper configurations and one mass model control, each fixed to a cantilever beam. These beams are driven over a frequency range centered on their first mode resonant frequency. Through the observation of their steady state response, a mathematical model is used to assess the damper performance. By repeating this test under a range of input amplitudes, the degree of nonlinearity in the dampers is ascertained. The conclusions of this experiment will determine the feasibility of using particle dampers in space and provide reliable models on which to base further investigation or actual space based applications.

The satellite was manifested as an ELaNa-14 back-up payload on the JPSS 1 launch, in case one of the other cubesats is not available for this launch. Eventually it got manifested on the ICESAT 2 launch.

A United Launch Alliance Delta II Heavy rocket will launch NASA's Ice, Cloud and land Elevation-2 (ICESat-2) mission from Vandenberg Air Force Base, California. The ICESat-2 mission will be the final for the workhorse Delta II rocket, which has launched 154 times, including missions for the U.S. Air Force, NASA, the National Reconnaissance Office, and commercial customers. Go Delta! Go ICESat-2!
Click to expand...

This will be the final flight of the venerable Delta II rocket, which has been in use since 1989.

Space Launch Complex-2, the West Coast home of the Delta II rocket at Vandenberg Air Force Base in California, is a classic launch pad design with a Fixed Umbilical Tower and a Mobile Service Tower. The rocket elements are sequentially hoisted and integrated atop the launch mount using the mobile gantry, which also provides the primary access and weather protection during pre-flight testing and then retracts a few hours before liftoff.

SLC-2 was constructed by the U.S. Air Force in 1958 for the Thor intermediate-range ballistic missile and has been in use by the Delta rocket family since 1966. ICESat-2 will be the 45th Delta II launch from this complex.

About the rocket: The Delta-II 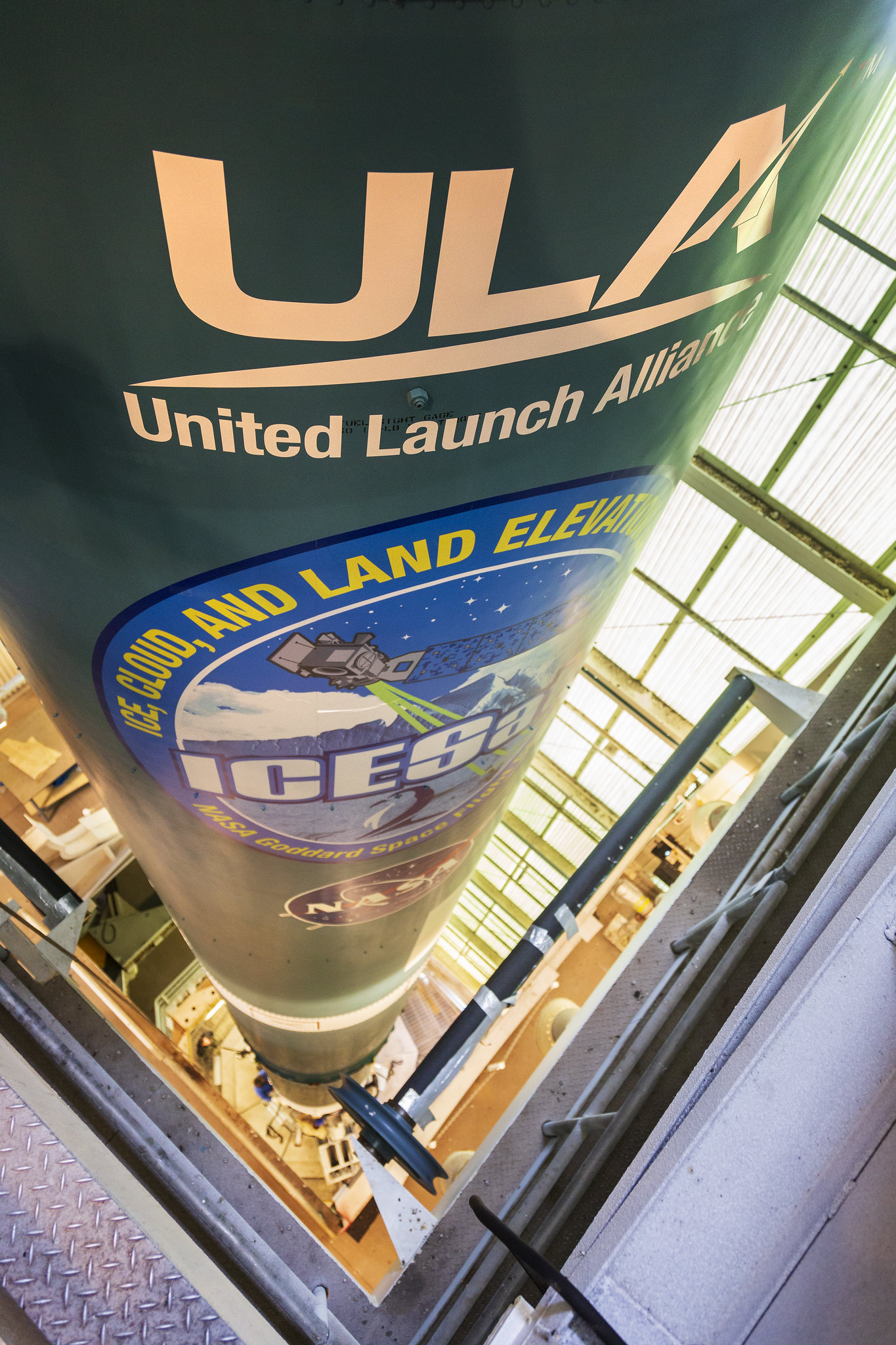 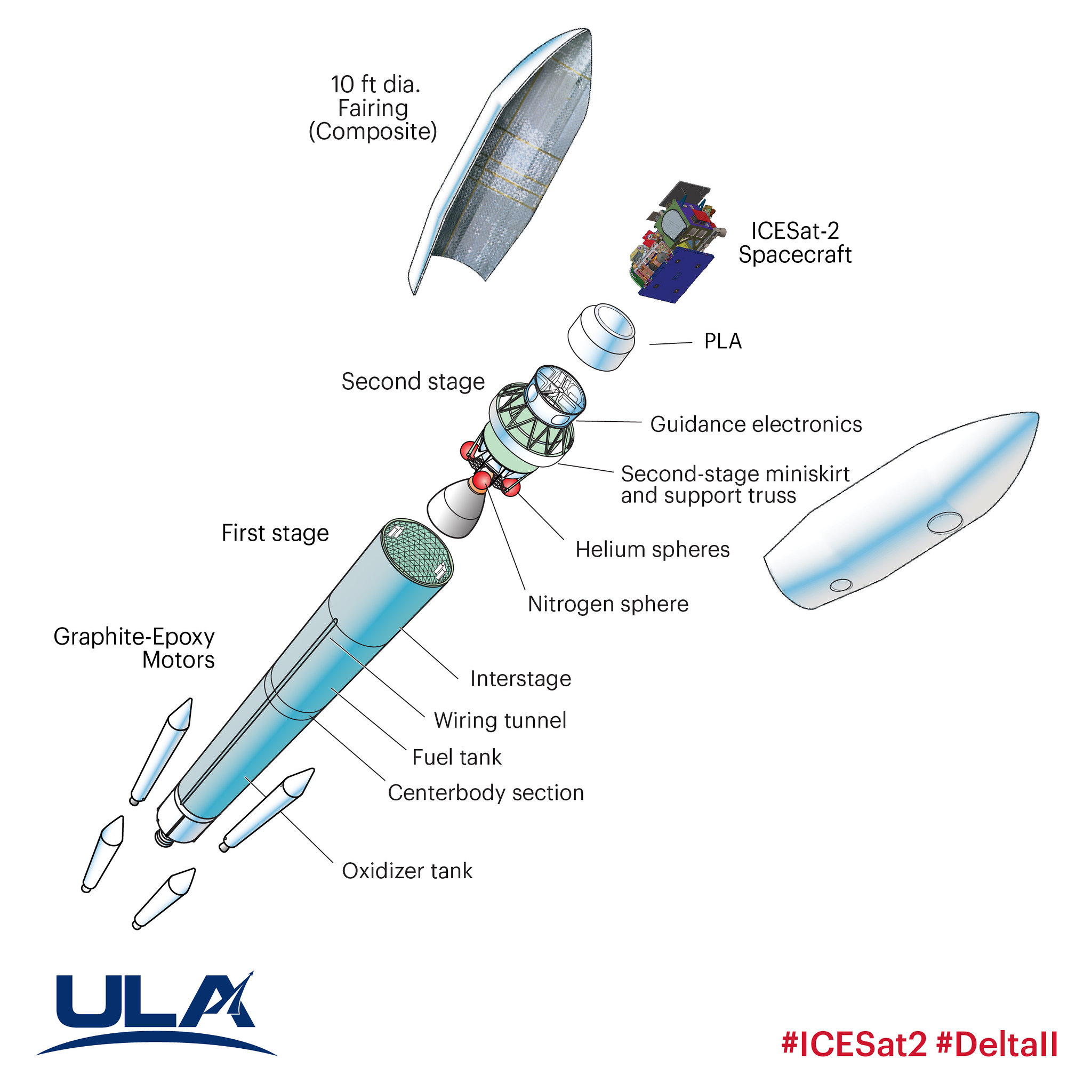 The Delta II program has a rich history. The rocket has launched 150+ times with a success rate of 98.7 percent.

Delta II has launched many memorable missions including NASA’s rovers Spirit and Opportunity, the Phoenix Mars Lander, all operational GPS missions through the constellation of 21 GPS II-R missions for the Air Force, and commercial missions for Iridium, Globalstar and three DigitalGlobe satellites.

All ICESat-2 mission-related pictures can be found here.

I will be watching this in person. Hopefully everything goes smoothly.

And her final launch is perfect!

And this post would not be complete without the launch videos!

But she isn't gone for good. There will be a Delta-II on display at the Rocket Garden at KSC, as announced in the webcast, so you can still see her at the garden, together with other rockets.

Thanks for serving for nearly 3 decades, Delta-II! You'll be missed!

I will freely admit that there were tears in my eyes as she lifted off, and the stiff sea breeze didn't contribute much to that... Though the fact I was looking through a monocular as the SRB exhaust plumes cleared the hills between me and the pad may have contributed a bit more than I had expected. VERY bright.

Also, fun trivia bit I heard from a 30th Space Wing PAO rep... The turnout at the viewing bleachers was not just record setting, it was record smashing... There had never been that much of a turnout for a Delta II out of Vandenberg. Bleachers were overflowing, and they seat 250ish people. And there was probably at least that many behind me at the shuttle bus pickup to go to the viewing area who probably didn't get to see the launch as anything other than a brightening of the cloud deck.

https://www.bbc.co.uk/news/science-environment-52479316
You must log in or register to reply here.