Well, it's possible to built Starship at Boca Chica and then do a sub-orbital hop to the actual orbital launch platform....
I think that flight profile is possible from there

But back on topic, it's important that the SLS flies alongside Starship (and others) !
The ISS has shown that multiple vehicles are needed for a long term projects.

If NASA requires an escape system in order to human rate the rocket, Elon must put it there.
Click to expand...

An alternative scenario could be that Starship launches uncrewed and also the orbital tanking is done automatically. Only when the Starship is ready, a crewed Dragon capsule is launched, docks to the Starship and the crew transfers to it. I think up to 7 astronauts can be cramped into Dragon for short flights. That would be enough for a 'Dear Moon' flight.

Can we keep this topic focused on SLS news updates, and debate about SpaceX amazing achievements somewhere else ? Many thanks.

January 6, 2021. By Stephen Clark (for SpaceflightNow)

NASA is moving forward with a crucial test-firing of the core stage of the first Space Launch System heavy-lift rocket as soon as Jan. 17 after engineers were satisfied with the results of a fueling test last month.

The hot fire test is the culmination of the SLS Green Run, a year-long series of checkouts of the program’s first flight-ready core stage on the B-2 test stand at NASA’s Stennis Space Center in Mississippi.

The core stage will fly on the Artemis 1 mission, the first full-up test flight of the Space Launch System and the Orion crew capsule. Artemis 1, which will fly to the moon and back without astronauts, is officially targeted for launch in late 2021, but that schedule may be in doubt after delays in the Green Run campaign at Stennis.

Future SLS/Orion missions will send astronauts to the moon, where NASA intends to land humans and build a mini-space station in lunar orbit in the 2020s.

Teams from NASA and Boeing, which built the SLS core stage, loaded the 212-foot-tall (64.6-meter) rocket with super-cold liquid hydrogen and liquid oxygen Dec. 20. The fueling test, known as a wet dress rehearsal, was the first time the SLS propellant tanks were filled with cryogenic fluids.

Engineers ran the core stage through a mock countdown, simulating the pre-flight procedures it will see on the launch pad at the Kennedy Space Center in Florida. But the rehearsal was aborted at T-minus 4 minutes, 40 seconds, before full pressurization of the rocket’s liquid hydrogen and liquid oxygen tanks, according to a spokesperson at NASA’s Marshall Space Flight Center in Huntsville, Alabama, where the SLS program is headquartered.

NASA said more than 733,000 gallons of super-cold propellants were loaded into the core stage on the B-2 test stand, the same facility once used to test-fire Saturn 5 rocket stages and a space shuttle propulsion test article.

All previous testing of the SLS core stage was at ambient temperatures, not in cryogenic conditions.

NASA said six barges filled liquid hydrogen and liquid oxygen supplied the SLS core stage during the wet dress rehearsal. The vessels were positioned in a waterway near the B-2 test stand.

Engineers detected no leaks during the multi-hour test, but the simulated countdown was automatically stopped with four minutes left until the planned hold point. NASA said in a statement the countdown was halted due to “timing on a valve closure.”

“Subsequent analysis of the data determined the valve’s predicted closure was off by a fraction of a second, and the hardware, software, and stage controller all performed properly to stop the test,” NASA said. “The team has corrected the timing and is ready to proceed with the final test of the Green Run series.”

Ground teams at Stennis drained the rocket’s cryogenic propellants while engineers reviewed the outcome of the test. NASA said the test “provided structural and environmental data, verified the stage’s cryogenic storage capabilities, demonstrated software with the stage’s flight computers and avionics, and conducted functional checks of all the stage’s systems.”

Despite the early end to the wet dress rehearsal last month, NASA officials have approved plans to go ahead with the final test of the Green Run campaign.

“During our wet dress rehearsal Green Run test, the core stage, the stage controller, and the Green Run software all performed flawlessly, and there were no leaks when the tanks were fully loaded and replenished for approximately two hours,” said Julie Bassler, SLS Stages manager at Marshall. “Data from all the tests to date has given us the confidence to proceed with the hot fire.”

The core stage’s four Aerojet Rocketdyne RS-25 engines will ignite and burn for more than eight minutes, the same duration they will fire during a real launch. Programmed commands will adjust the engines’ power settings during the test, mimicking their thrust profile during launch.

All four engines on the SLS core stage have flown on multiple space shuttle missions, and the high-performance powerplants will provide up to 2 million pounds of thrust at full throttle. The reusable engines on the single-use core stage will be discarded after each SLS flight.

Assuming a successful hot fire test, teams at Stennis will prepare the core stage for shipment to NASA’s Kennedy Space Center early nexts for final processing to ready the rocket for its first test flight.

At Kennedy, the SLS core stage will be mounted between two solid rocket boosters, and an upper stage and Orion spacecraft will be installed on top of the launcher before rolling out to pad 39B for liftoff. The SLS core stage for the Artemis 1 mission was rotated vertical in January 2020 for installation into the B-2 test stand at NASA’s Stennis Space Center in southern Mississippi. Credit: NASA/SSC

Covered in orange foam insulation, the huge Boeing-built rocket stage has been fastened in the B-2 test stand at NASA’s Stennis Space Center since January, when it arrived by barge from a manufacturing plant at NASA’s Michoud Assembly Facility in New Orleans.

Since January, work to ready the rocket stage for its first test-firing has been suspended several times, first by the coronavirus pandemic, and then by several close calls with hurricanes approaching the Gulf Coast.

The hot fire test is a final exam in the development of the core stage, the tallest rocket stage ever built. The SLS core is derived from the space shuttle external tank, and its four RS-25 engines — built by Aerojet Rocketdyne — are leftovers from the shuttle program.

After the core stage arrived at Stennis in January, ground teams lifted the rocket by crane and lowered it onto the B-2 test stand, a facility once used for test-firings of the powerful first stage of NASA’s Apollo-era Saturn 5 moon rocket.

In March, NASA halted operations on the test stand for two months with the onset of the coronavirus pandemic. NASA and Boeing engineers resumed work on the core stage in May after introducing new guidelines for physical distancing and other measures to guard against COVID-19.

Ground teams switched on the core stage’s avionics in June and performed a thorough checkout of the rocket, then proceeded into safing checks, which verified controllers can send commands to shut down the rocket’s engines and other major systems in the event of a problem.

Then engineers commenced testing of the core stage’s main propulsion system, searching for any signs of leaks and verifying all connections between the engines and the rocket’s tankage. That test, known as Test 4 in the Green Run, also included engine igniter checks and tests of the engine control valves.

With that test passed successfully over the summer, teams moved on to a checkout of the core stage’s hydraulic system, which drives thrust vector control actuators to swivel the four RS-25 engines and steer the rocket in flight.

Teams activated the rocket’s auxiliary power units, which drive the hydraulic loops for engine steering system. The engines then gimbaled individually to ensure they could be swiveled within an 8-degree cone, followed by gimbal test profiles to simulate how the engines will move together in flight.

The hydraulic thrust vector control test concluded Sept. 13, wrapping up a series of functional checks on the rocket as engineers moved into final reviews and rehearsals for the wet dress rehearsal and hotfire.

The next milestone, known as Test 6, was completed Oct. 5 after control teams at Stennis ran through a simulated 48-hour launch countdown to validate activation, fuel loading, and pressurization sequences.

The simulation set the stage for the wet dress rehearsal, but Hurricane Delta and Hurricane Zeta forced further delays.

Teams at Stennis planned to fill the SLS core stage with cryogenic propellants Dec. 7, but data showed the fluids were warmer than planned, NASA said. Controllers successfully loaded a “limited amount” of liquid hydrogen into the rocket before ending the test.

Engineers modified test procedures and equipment to ensure the cryogenic propellants could be maintained at the proper temperature before successfully filling the tanks Dec. 20.

It's about time to finally lit up those engines! 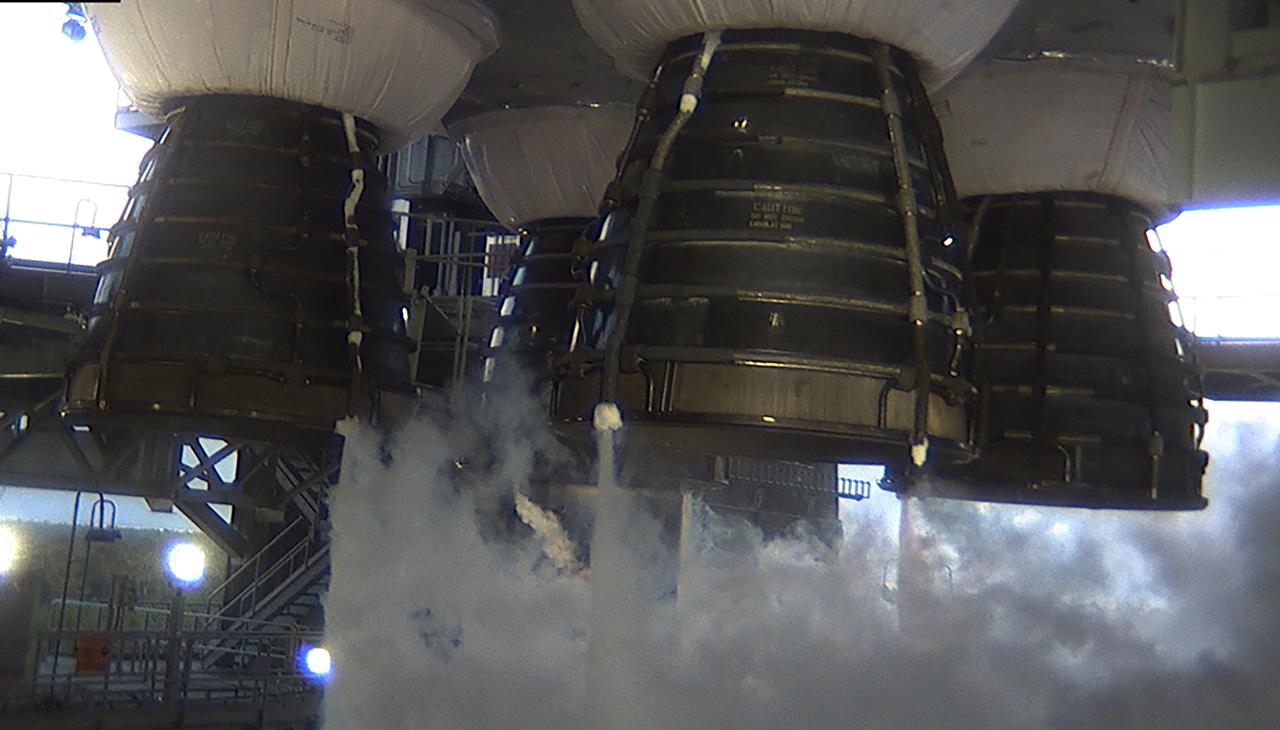 Nice shot of those engines and arrangement, a cross between the Shuttle and the Saturn
Hope it works fine and this thing gets launched.

The big-A keeps updating us

We can easily have a sensor issue and delay this until tomorrow....

Working a few issues now... less than 15 minutes away from the announced T0, but probably more with the issues

Still working to a new time...

By the talk of the gentleman in the webcast, they don't like the engine inlet temperatures and/or pressures.

~30 minutes away
You must log in or register to reply here.