Also starting to make modules for the discarded parts, here the shell+parachute separation. Upper in the thread there is a picture from the discarded shell laying in one piece on the martian soil, so it is sturdy enough not to shatter on impact (even with the hypersonic parachute, it still hits the ground at nearly 30 m/s). and, earlier in the flight, the heatshield separation : The more I'm thinking to it, the more I'm convinced having the rover mesh as a static object will be a can of worms. If later you change something on the rover, it would mean doing the same changes on the lander, and that's crazy.

So what I'm going to try is to have the rover as an independent vessel attached to the lander platform, and then I'll try to move the attachment point and orient it (stock Atlantis RMS does that) so that we can simulate a "down the ramp" animation.

@gattispilot : Can you send me the latest version of the full rover addon (with mesh, textures, cfg, dll...), with the same .951 scaling you used ?

Sure. I might be able to have the rover rise up . Yes will work moving the attachment point. Of course the rover wheel will not be moving

Of course the rover wheel will not be moving
Click to expand...

Yes, we'll need to have the "rise up" animation coded on the rover side.

Maybe you can have them rotate while the animation is going on ? It doesn't have to be very accurate, but I think seeing those pretty aluminium tires roll would be very cool !

@gattispilot : alas bad news and sorry for the lag, Blake's Orbiter Tools won't let me import that last version of the lander, Blender prompts script errors... Worked very fine with your previous models. Can you check everything is good on your side ? Maybe something like an "empty object"...

Also my 45° tilted thrusters are not good, I see nothing like that on the CNSA animations. I'll make them vertical, with some tuning the autopilot should be able cope with it. I'll do that part myself, because I want to keep track of the coordinates of the thrusters. Not top-priority stuff anyways, but I write it as a self-reminder there.
Last edited: Aug 24, 2021

Worked on the vertex definitions (hull geometry) on the heatshield part, had to do some trial and error, but I'm quite happy with the results, it rolls a bit and settles to the landing state (without having to use ParkingBrake). I like how it looks a bit buried in the ground. Have to add some red dust puff on impact.

Of course it needs a real texture, the outer side should look a bit burned at this point.

In the background you can notice the aerodynamic shell, will have to work on the vertex definitions there too, and figure out something for the parachute. Those discarded parts are important because they'll give the player something close enough to inspect with the rover in a reasonable amount of time. This is just released hours ago by Scott Manley....might help in the development of the Tianwen lander/Zhurong rover:

Progress on the flap, the challenge is to 1) animate the unusual hinge and jack system 2) keep the normals in line. Not too bad in Orbiter... Now I have to get into the animation. It has to be the default state of the mesh because that way it will spare me animating the discarded shell. Tryiing to figure how to raise the body. I can animate the front and rear wheel to fold up and down. But to move the whole body? If you have the rover attached then maybe as the wheel rotate the attachment point moves up? The attachment whould be at the bottom of the body and not the touchdown points?

You'll probably (certainly) have to use the parent-child animation feature. The rover body and everything attached to it is an animated part, and superstructure like the head mast and antenna should be "secondary" animations children of the "rover body rising" animation. It is a bit complex, but the SDK certainly allows it. Stock Atlantis RMS does something alike.

For the attachment point it is a virtual thing, that has no connection with the mesh. It is simply a way to keep the rover and the lander linked together. In this regard it is simpler than Atlantis RMS. It is probably best I have the lander "shift" and rotate its (parent) attachment point, allowing to simulate the "down the ramp" sequence. Rover will be the child.

Yes parent-child. Not sure which should be the parent? If the body is the parent. then the wheels/axles are the childs. But I don't think the body will rise up. The wheel will fold down.

If the wheels/axles are the parent and body the child. Then the body will move with the wheels? But then we have 3 pairs wheels.

If the body is the parent. and attached to the lander. As the wheels unfold the attachment point moves up to raise the rover.

Try with the middle wheels axles being the parent. Don't think it as a physical or engineering problem, but as a logic problem.

The difficulty is that, in Orbiter, animations are a very abstract thing, merely mathematical and logical ; they have no direct relationship with what we call "Reality(tm)". Its like making a movie : we want something that looks like physical behavior of assembled and articulated parts, but it isn't.

Strange flying saucers in the Martian sky, looks good ! Nozzles are now vertical, and good news the autopilot deals with it ! Next lets get the landing gear animation working. I started the rover rising.
I have encounter this issue.

see the grey part are on top of the gold body part
now I raise the body. 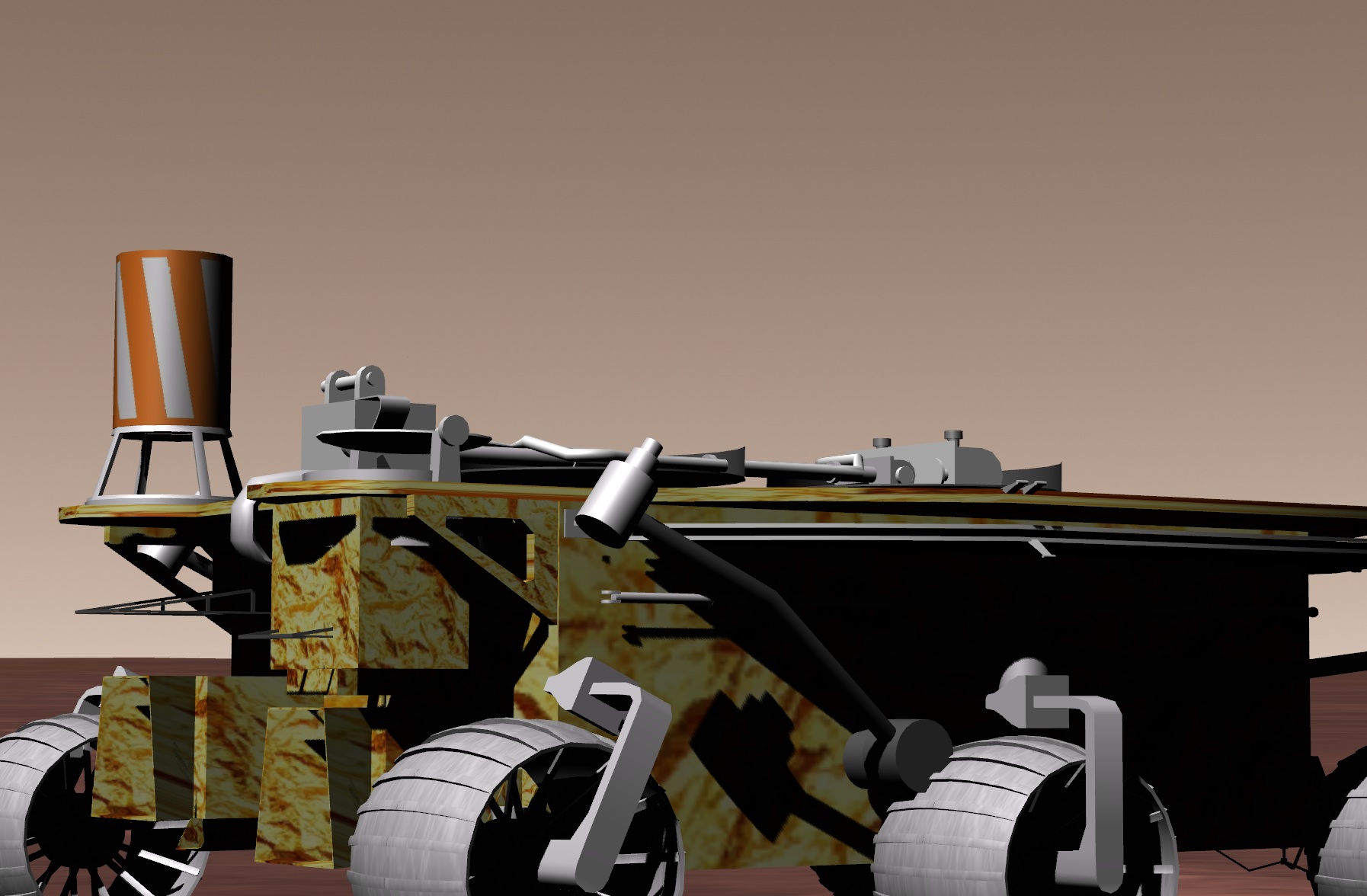 Here is the code. You can see the groups are all in the same animation.

I have seen this issue when I was making the James Webb.

Weird, are you 100% sure of your meshgroup indexes ? In my experience own it is very easy to miss one, and then such weird things happen. 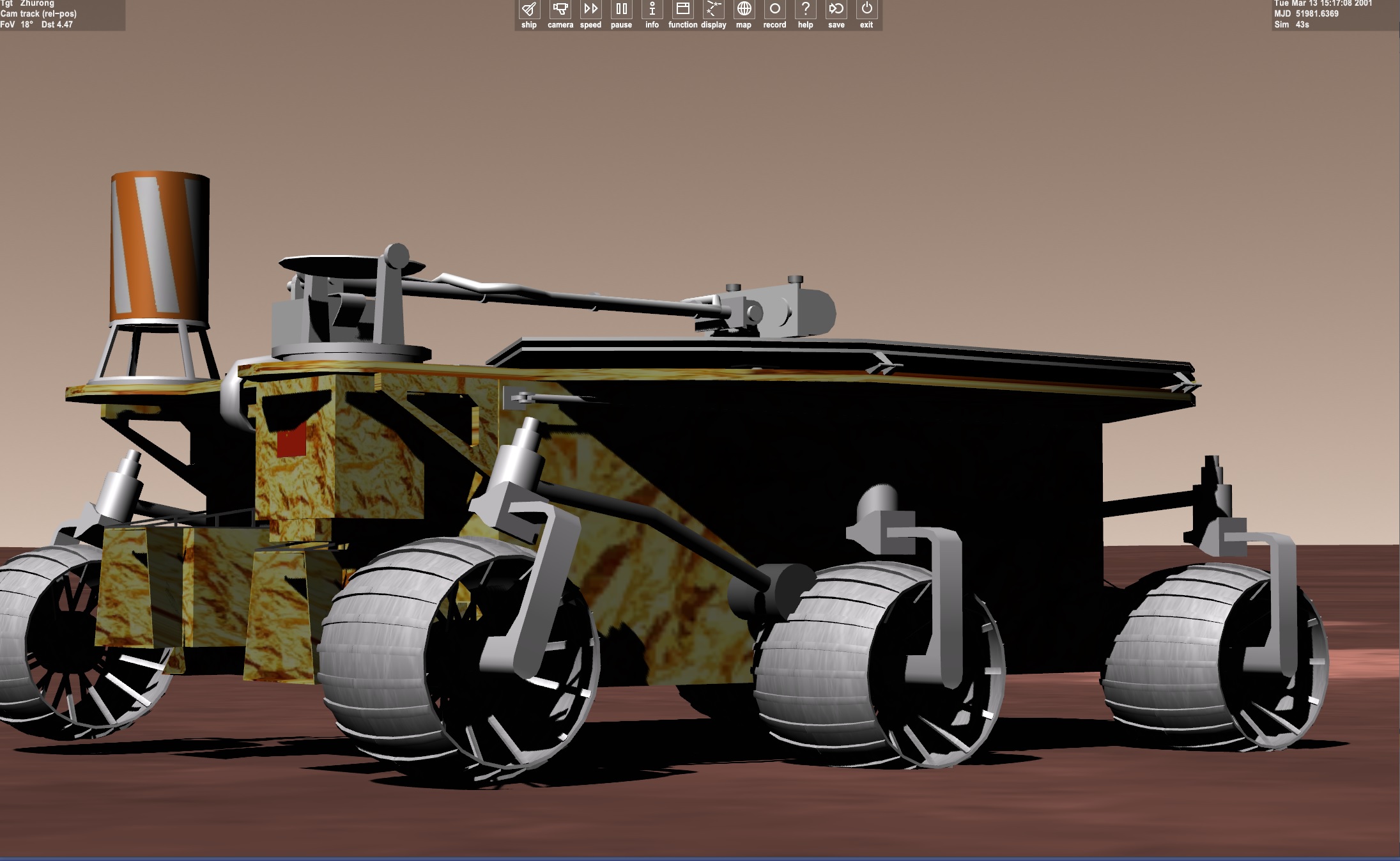 now the mesh has to be redone. The easy fix is to make the wheels further out. But then will affect the lander ramps. Or I could shrink the main body? 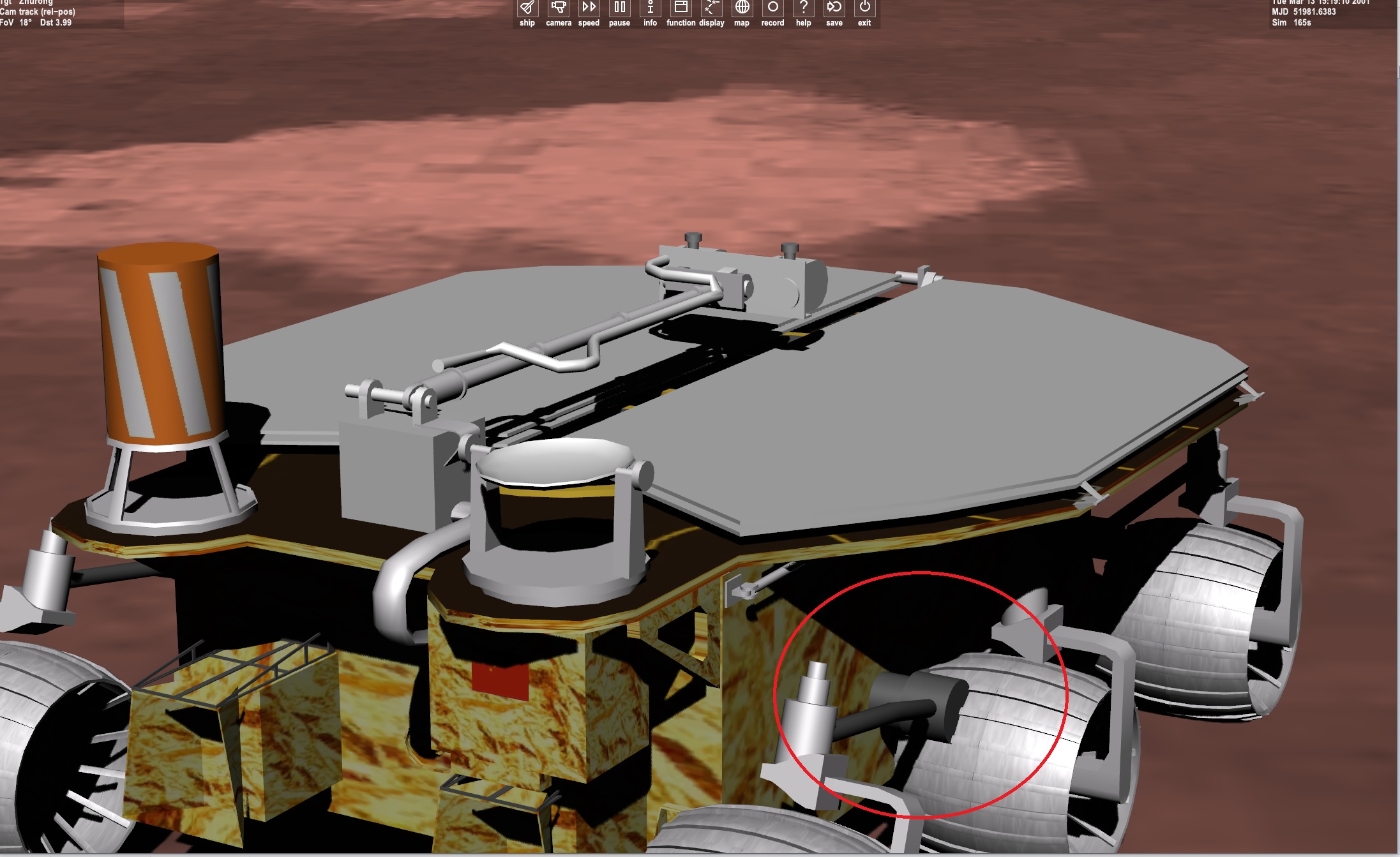 Hello guys, not forgetting anything, but got a philosophy teacher job in early September, something I studied for those last years. So I've been pretty busy discovering everything, the high school, the teenagers, the other teachers... Quite a lot of input to process in a very short period of time. Also, the job is in a town 80km away from my place, so currently I'm spending 3+ hours / day inside my car. Well, lets say I like driving very much, and that's the good thing about it

I'm moving again in a few weeks, so that I'll live only 2 km away from the job, which will be a drastic improvement in terms of free time ; I have good hope to resume the Orbiter projects by then.