Really like this addon and am using it to fly the Apollo missions that might have flown after Apollo 20 and ASTP. You should ask gattis to share some of his future Lunar equipment or advanced Skylab like using the TRS as an unman tug

Nasa did look to extend Skylab some what like Skylab 1980 but using Apollo hardware to resupply since it was never planned to be done past Skylab 4 or 5. With the one solar wing missing and the tunnels not big enough to allow those racks we see in the Shuttle or ISS it was scrapped as an idea.

Did lots of work today, mostly banging my head against a wall over the launch complexes. Only launch complex from NASSP I'm using thus far is LC-37, the LC-34 and 39 I'm using are Kev Shanow's models which I'm using with Spacecraft4.

Since I'm here, have some goodies. 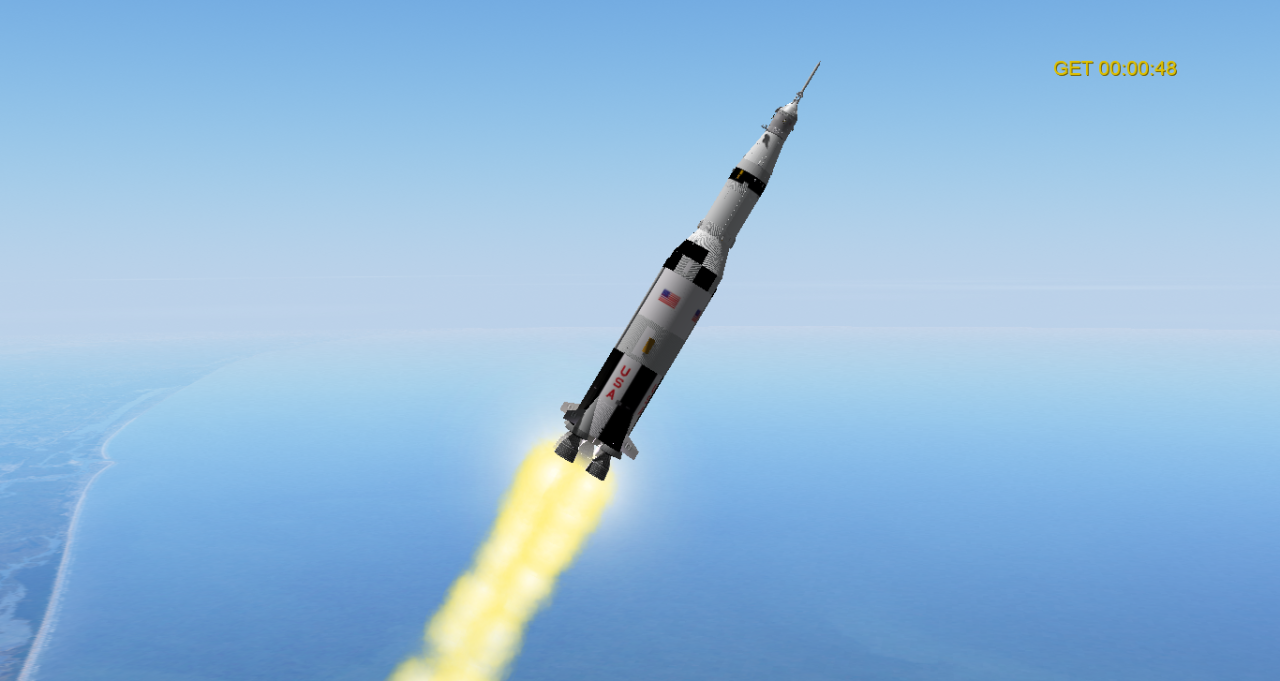 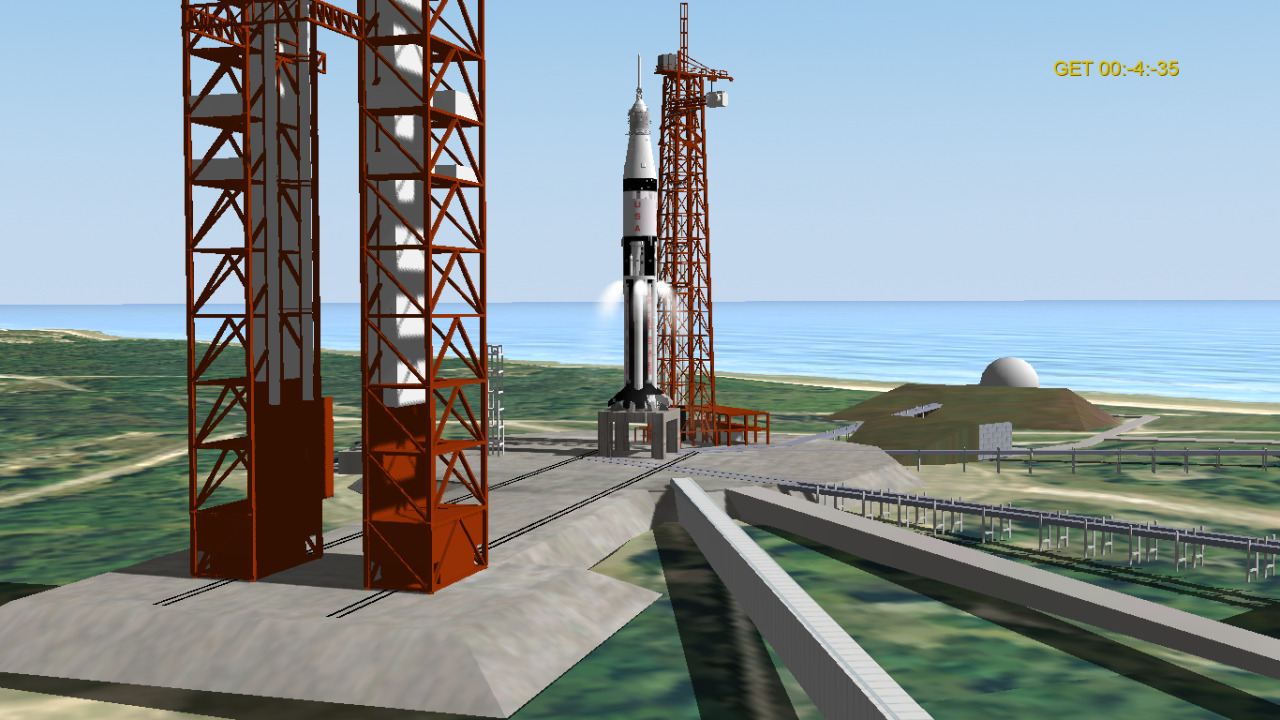 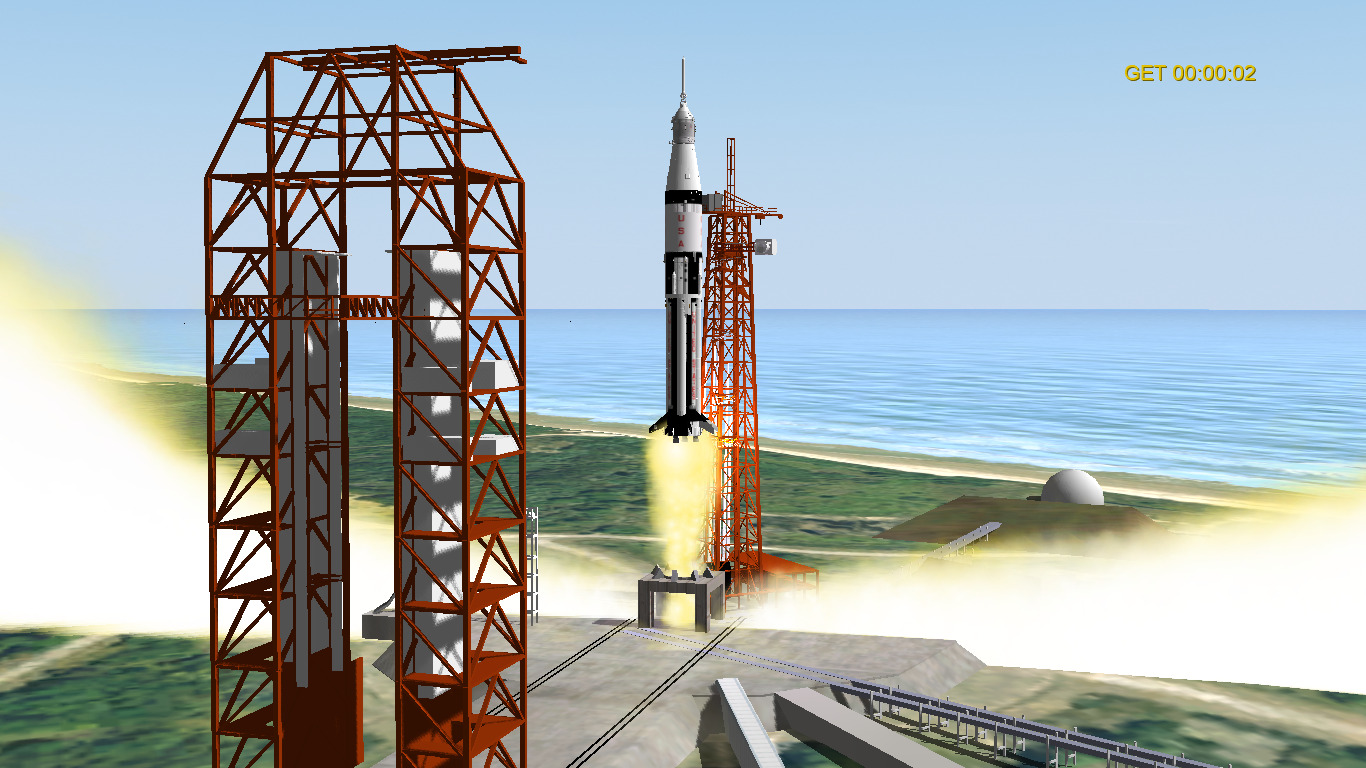 My only comment is trying to keep dependencies low.
I have nothing against Kev's pads, but if you stick with NASSP there will be less things to download
But one can always redo the scenarios to use NASSP pads... or no pads at all

So go with what you have and it will be fine

I had a lot of technical issues with the NASSP pads, especially when I loaded them in as permanent meshes in the Canaveral config file. It's graphical glitches mostly, I'll have to load them in and take a screenshot to demonstrate the issues I'm having. LC-37 has this issue too but it's not as bad compared to LC-34 and 39. I would have to load them in as Spacecraft4 vessels most likely, but I had issues when I tried that with the NASSP LC-34, it refused to load into the scenario with the correct heading, it was loading in at 0 instead of 180.

Having a Saturn S 1B using the AMSO CSM on the Milk Stool and with lights on for night launches would be great. I think in Skylab B 4th rock made it happen 2010. you might look to a S1B like that but the SLA panels stay on the S 1B as with the Skylab missions

barrygolden said:
Having a Saturn S 1B using the AMSO CSM on the Milk Stool and with lights on for night launches would be great. I think in Skylab B 4th rock made it happen 2010. you might look to a S1B like that but the SLA panels stay on the S 1B as with the Skylab missions
Click to expand...

There's a spotlight add-on I'm pretty sure where you can load in spotlights as their own vessels. I might look into that. As for having the SLA panels not jettison from the S-IVB, technically I wouldn't know how to do that. The SLA panels are loaded in as a fairing so they have to come off in some capacity.

Back to the subject of launch complexes, I loaded in the foundation of 39B from NASSP to show the issue I'm having with permanent meshes in general. 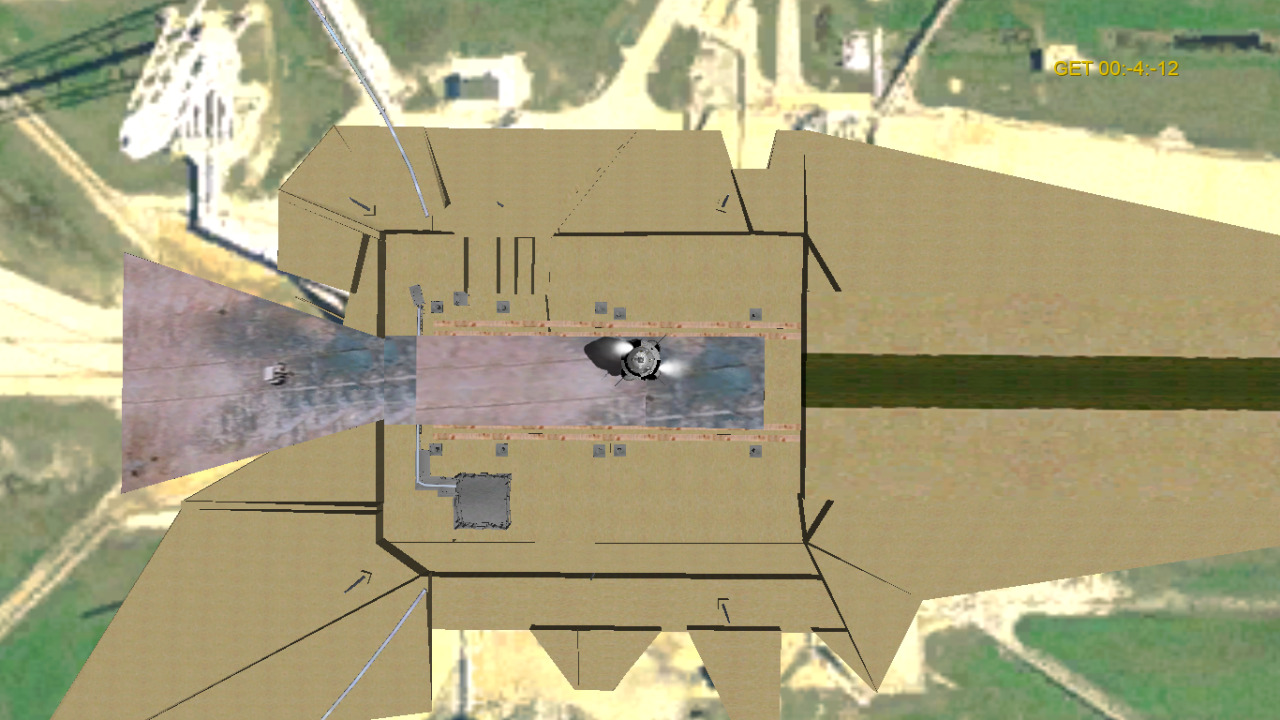 From the top it looks fine, excuse the incorrect placement of the Saturn. 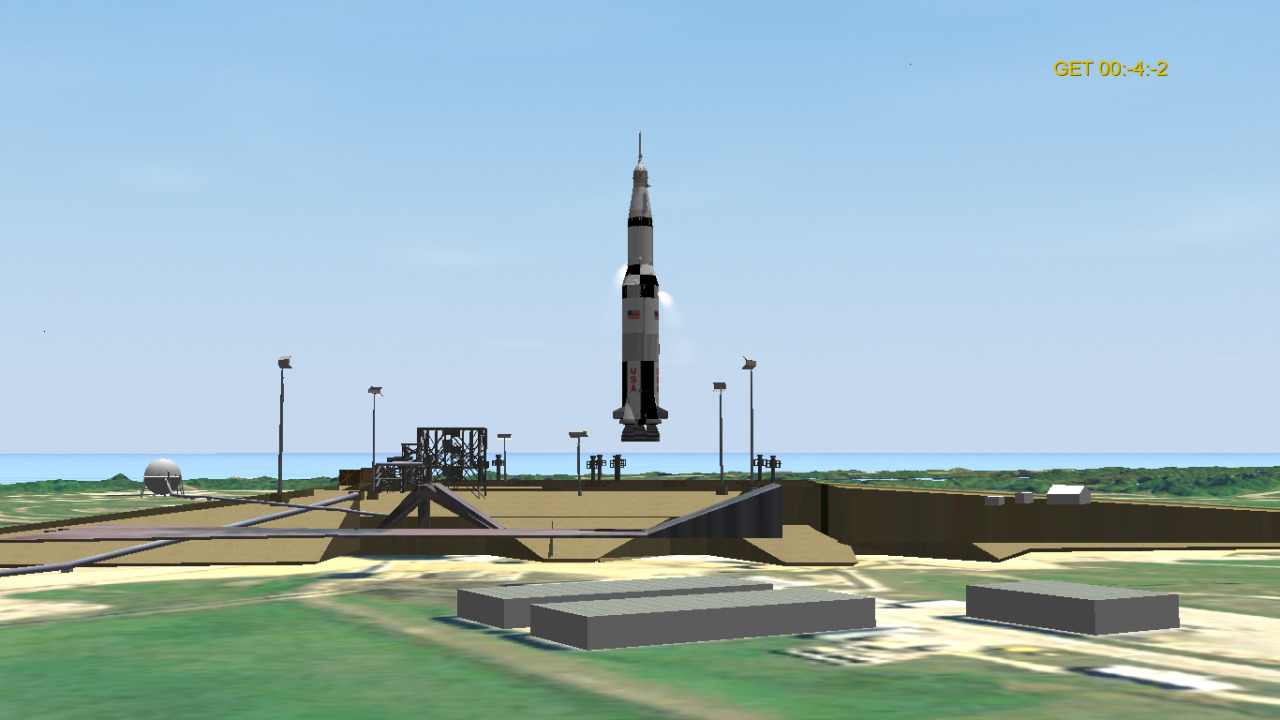 But from the side there's an issue. Ideally I'd load in the mobile launcher and tower as a Spacecraft4 vessel, but in trying this I found that they load in at an angle and won't stand level with the concrete foundation of the launch complex. LC-37 has this issue where if you view the complex from above, the launch towers will appear hidden behind the ground texture, from the side 37 looks okay. I tried loading in Kev's launch complexes in this way as base meshes and have had similar issues. Not sure if it's an error in the base code (aka my fault) or if it's just due to how the meshes are constructed in the first place.

For reference, here is the code for how 39B is loaded in those screenshots:

Update, it was my fault.

As for dependencies (apologies for taking multiple posts to get all my thoughts out) I might ask a few people if I may repackage their meshes and textures. I know that Sputnik was gracious enough to allow me to repackage a few Velcro meshes in the past. I've fully learned my lesson from the last time I tried doing an add-on on this scale. 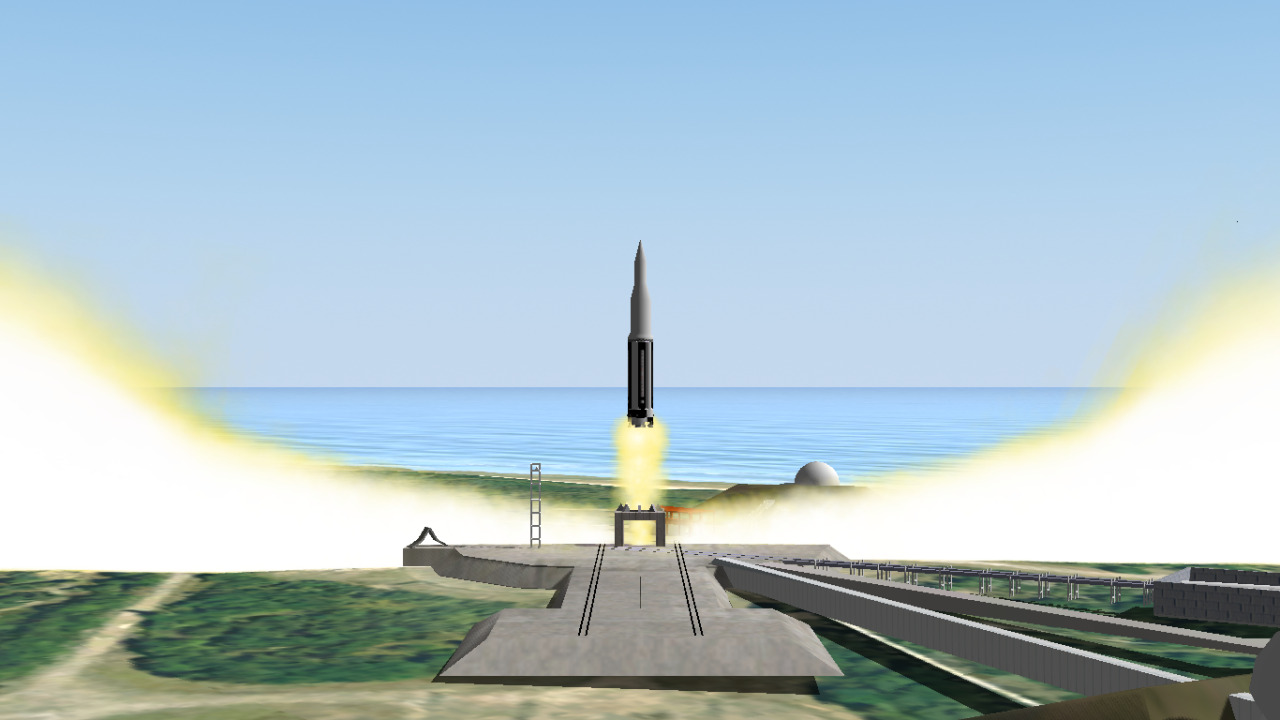 For pads, have you tried using NAASP solar system on your scenarios ?

For dependencies, you can instruct the user to copy only meshes and textures from the required add-ons.

The latest stable version of NASSP (for Orbiter 2010) has the LC-39 bases loaded in as base meshes, while the mobile launcher and tower are their own spacecraft that can be rolled out to the pad. I could use the low poly meshes from the older NASSP (6.4.0) which had the launch complexes and pads as one solid thing that was a part of the base scenery, though I don't think it would look very pretty. I think it works better the way I have it now, plus the pads being their own spacecraft allows a bit of customization. Say for example, in my ideal NASA alternate history, NASA converts 39A into the Shuttle pad (as was done after the launch of Skylab) but retains 39B as a Saturn pad for Lunar, interplanetary, or Earth orbit spaceflights in general that don't necessarily require the Shuttle. There were ideas of making the Saturns into cargo launchers with a Centaur upper stage and they would be comparable in capabilities to the Titan IIIE, at least in the case of a Centaur on a Saturn IB. A Centaur on a Saturn V is a beast all its own.

I'd love to get my hands on the blockhouse audio from the launch of SA-1, the first Saturn. I love it because of all the people in the blockhouse shouting GO!!
Last edited: Jan 28, 2020

You are overthinking it

Use NASSP 2016 version with this scenario as a starting point.
You just need to add the rocket, all else is there, including floodlights.

Yes NASA did look at using S 1B's after ASTP for cargo launches and they looked at a larger CM to fly up to 6 crew to a Space Station but the shuttle was used for that. I think NASA is selling us on a stupid ideal of this gateway. The Apollo and Skylab guys got it right that too many launches cost too much so they used one launch to do missions. These Gateway guys are trying to use 5 or 6 missions when 1 could launch most of the gateway unmanned and then a manned crew could take up the last component.

Taking this back off the shelf, will be working on it in tandem with the 2010 version of the MS2015 Old-Atlas-Series, I miss working on the Saturn.

Good to hear your back on the case. I enjoy the Saturn's and looking back on it might have been the way to go. I'm using Skylab 1980 with the Apollo stuff to extend the life of Skylab and enlarge the crew size. I know NASA did testing on the S 1B about recovering it out of the water then refiring it at Stennis. They took a booster out into the gulf and dropped it into the water then pulled it out and back to the test stand and it worked, sounds like Space X is planning on doing that with super booster and first orbital Starship.

I know this is a little off base but just flew over NASA"s Michoud complex and the hydrogen tank barrel for
sls 2 was outside and they were adding the O2 external feed line to the outside. sorry about not having pics but I was flying the chopper

I've been toying with the idea of simulating the pad aborts and Little Joe 2 abort tests from White Sands but the AMSO Apollo CM (sans a Service Module) immediately pops its mains out on the ground, so I'm mulling over how this could be done. I know the AMSO meshes are encrypted so I'm not sure if I can load it as a static mesh and then spawn the actual spacecraft at LES jettison. Working on Apollo 9, further complete Apollo spacecraft missions should flow cleanly from this.

So far, what I have done is as follows:

What I'm working on now:

What I want to have complete by the release of this add-on:

One thing that I'd like to know is the rendezvous profile flown by the Skylab missions and ASTP. For example: What orbit does the CSM start in? How far behind the target is the CSM at orbital insertion? What is the sequence of orbital maneuvers that eventually gets the CSM to its target? When I flew the Gemini missions recently (estar's Project Gemini 4.5 for Orbiter 2006) I did a lot of research into how the rendezvous missions were done, I even went as far as making new scenarios so that the Agena was in the proper orbit and in a position where it would be the correct distance in front of the Gemini at orbital insertion. The endgame of each of these rendezvous scenarios had the spacecraft in a coelliptic orbit a certain distance below and behind the target, with a terminal phase burn done along line of sight a set distance behind the target in order to establish the final closing phase of the rendezvous. Even if I'm pressured to release this without these post-Apollo 17 scenarios, I'd still like to learn the specifics so I can eventually set up the scenarios and fly these missions for real (I've never really flown the post-lunar Apollo spacecraft missions by the book, so it's something I'd like to do at some point). I recently learned how to fly the rendezvous from Apollo 7 as it was actually done which was an absolute joy when I got it right, and I want to one day repeat that when I end up flying Skylab and ASTP.

As a bonus, here are the screenshots from when I did that simulation of Apollo 7 (of course using this Multistage2015 add-on that I'm making for all of you): Wasn’t sure how to upload the entire file but here’s a couple pages from a document I have. Let me know if you need more. From what I understand, the Skylab profiles are similar to the Gemini coelliptic profiles

Ah, wonderful! I figured they'd be the same, I just wasn't sure about orbital heights and how many orbits the rendezvous would take. That looks like an M=3 profile. I do have pdf files of the press kits for these missions but I don't remember if they go into specifics about the rendezvous portion of the flight like previous press kits did.

Having the profiles from Skylab 3 and 4 would be nice too, assuming Skylab’s orbit decayed a bit between each mission meaning the numbers would be slightly different. I have the orbital elements of Skylab so if push comes to shove I can figure out the specifics from simply flying the missions and seeing what needs to be adjusted. Apollo-Soyuz is the one I’m most interested in given the historical significance and the longer rendezvous profile.
You must log in or register to reply here.